Busy town. The monster bank is on its outskirts.

Cyril (始まりの街シリル, Hajimari no machi Shiriru?, lit. Cyril, city of beginnings) is the hume town from Final Fantasy Tactics Advance. It is here that Marche Radiuju begins his adventure in Ivalice and also where his first engagement is held.

Later, Montblanc is introduced and Marche becomes a part of his clan.

"The Prancing Chocobo" is the name of the pub in Cyril. It is a popular clan watering hole and where the recent pub rumors can be read and missions can be accepted or canceled. Its name is a reference to "The Prancing Pony" from The Lord of the Rings.

The "Ramsen Armory" is the name of the local shop in Cyril. Here, discounts are given on weaponry wielded by humes.

Discounts are given on:

Welcome to the monster bank. Your monster awaits!

The "Monster Bank" is the holding place for all monsters captured by Hunters. It is similar to a zoo, as there are holding pens for all of the monsters. It is run by a Morpher, who has a unique bond with the monsters. In order to develop a powerful Morpher, one will have to capture as many monsters as possible, and then raise them by feeding them.

Early in the game, after completion of "#068 Fowl Thief!", "#194 Free Cyril" is unlocked. It is a simple three day dispatch assignment. Afterward, Cyril is liberated and never will come under attack. 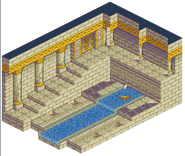 [view · edit · purge]Cyril is a masculine given name derived from the Greek name Κύριλλος (Kyrillos), meaning "lordly" or "masterful", which in turn derives from Greek κυριος (Kyrios) "Lord". Famous people with this name include Saint Cyril the Philosopher, who, along with Saint Methodius of Thessaloniki, devised the Glagolitic and Cyrillic writing scripts in the 9th century, the latter of the two being named in his honor.