A pole carved from the wood of a cypress.

The Cypress Pole (サイプレスパイル, Saipuresu Pairu?), also known as Cypress Pile or Psycho Spiral, is a recurring pole or staff in the Final Fantasy series. It is generally a low-ranked weapon with no special attributes or abilities, but on occasions is attributed to the Confuse status or ability.

The Psycho Spiral is a mid-ranked staff that provides 14 Attack, 10% Accuracy, Spirit +3, and casts Confuse when used as an item during battle. It can be equipped by Cecil, Ceodore, Rosa, Porom, Leonora, Harley, and Golbez, and can be bought for 2,000 gil at Baron (Kain's tale), Troia, or Mysidia, or found at Mount Ordeals (as Porom).

The Cypress Pile is a medium-ranked staff for Vivi, providing 27 Attack, inflicts Confuse on hit with Add Status 1/5th of the time when using Attack, and teaches the spells Demi, Comet, and Break. It can be bought for 3,200 gil after the party returns from the Outer Continent at Lindblum, Oeilvert Mogshop, Desert Palace Mogshop, and Esto Gaza after the Desert Palace.

The Cypress Pole is the second weakest pole, being slightly stronger than the Oaken Pole. In the original PlayStation 2 version, it provides 33 Attack, 12% Combo Rate, and is Earth-elemental. Poles' attack speed is average. Cypress Pole can be bought for 2000 gil at Rabanastre or from the Bazaar by selling four Earth Stones, five Bone Fragments, and three Succulent Fruits. It requires the Poles 1 license, which costs 15 LP.

In the Zodiac versions, it now provides 22 Attack, 30 Evade, 25 CT, 15% combo rate, is still Earth-elemental, and requires the Poles 2 license for 30 LP. It can be bought in Rabanastre, Nalbina Fortress and Barheim Passage for 960 gil, found as a treasure in the Barheim Passage (The Zeviah Subterrane), or from the Bazaar for 480 gil by selling the same loot pieces as before.

The Cypress Pole is the weakest pole, providing 6 Attack, 20% Weapon Defense. It can be bought for 1000 gil at Outfitters from Chapter 2 onwards or found at Zeirchele Falls and at Castled City of Zaland as a rare treasure.

The Cypress Pole is the second weakest pole, only slightly stronger than the Tonfa. It provides 32 Attack, 2 Defense, 2 Resistance, 2 Speed, and teaches the ability Rend Armor to Master Monks for 350 AP. It can be gotten at the Bazaar by buying Uncommon Poles E.

A staff made from cypress. It holds a special power where it has a chance of confusing those it strikes. Cypress holds stronger magic power compared to other woods, and is sought after as the perfect medium to use for mid-tier mages. To some it may look like a stick, but the shape, length, form, and the well-balanced magic power it holds makes it perfect for mages to use as a means to tap into their magic powers.

A staff from the distant world of Gaia. The design of the rod's head includes a protrusion of both the left and right sides, as well as a hollow circle in the middle. It can be found in the Forgotten Continent of Gaia within a structure that prevents any visitors from using magic.

Cypress Pile is a Staff obtained by crafting it using 1,600 gil, x6 Farplane Souls, x2 Elemental Tears, x4 Iron Ores, x8 Lumbers, and x2 Mythril Ores, and by finding it at Forgotten Walls and during the Final Fantasy XII event, Nam-Yensa Sandsea. It provides 23 ATK, 6 MAG, 45 SPR, and has a 30% chance of inflicting Confuse.

Cypress Pile (FFIX) is a staff obtained during the Final Fantasy IX event, Iifa Tree. It provides 10 ATK, 75 SPR, MP +10%, and has a 30% chance of inflicting Confuse when attacking with it. 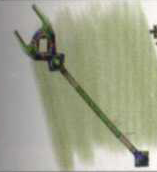 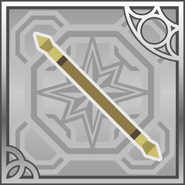 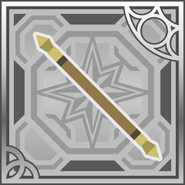 Cypress is the name applied to many plants in the cypress family Cupressaceae, which is a conifer of northern temperate regions. Most cypress species are trees, while a few are shrubs.