A samurai sworn to defend Doma, an eastern land whose royal castle was decimated by Kefka's treachery. Cyan joined the Returners to avenge the death of his liege and his beloved wife and child.

Cyan is a recruitable character in Final Fantasy Record Keeper. He joins the party after clearing the Phantom Train for the first time. He was also the Tier 2 recruit in the Touched by Magic Challenge Event, and could also be recruited by accepting and completing the Bonus Quest "Complete Imperial Camp Classic (VI)". He later appeared in Two Sides of a Coin.

Cyan, unlike Cloud recruited before him, is not an excellent addition to the party. While he has a very high Attack stat and his HP are good, his Defense is only average, and his stats are not as high as other samurai and characters that can use katanas, like Sephiroth, Auron, and Gilgamesh, only beating Firion. Cyan has a limited ability set (only Combat and Samurai abilities) and equipment compatibility in terms of weapons, as he can only use katanas and daggers. He can easily fall victim to the game's randomness at drawing new equipment, as he may not get the katana he needs to perform at his best. However, Cyan is one of the few characters able to equip all the armor, which lets players keep his defense and resistance in check. His element is fire, which is quite common as a dominant element, and in comparison to other samurai, several of his skills can give him the Retaliate status effect, which can allow him to counter attack and benefit some of the strongest Samurai abilities, and his Bushido Dragon Soul Break, while not too powerful, can heal him.

His default Soul Break is Bushido Fang, a physical attack against a single target. 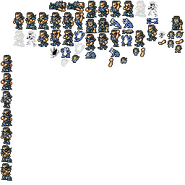