Draw cards from a deck of various effects

Cut Cards (デッキオープン, Dekki Ōpun?, lit. Deck Open), also known as Deck Open, is a recurring ability in the Final Fantasy series. It is an ability used exclusively by Ace.

Cut Cards is an ability known initially by Ace. It has Ace draw cards from a deck of various effects. Up to four cards can be drawn before they are used and there are four types of cards, each granting a different ability. The final effect is decided by the most present type of card, and is strengthened by the quantity of cards drawn.

The final effect can be one of the following:

Because Ace is able to draw four cards before being forced to use or dismiss them, there are four levels of effect for each ability. A two-card hand (Super-class, or Long Stop) simply increases power; a three- or four-card hand (Mega- and Giga-class) will deal damage to all enemies in the vicinity, or heal all allies. The higher the rank, the more potent it will be. However, if Ace draws, for example, the first two cards as Burst cards (into Super Burst), and the last two cards as HP Charge (into Super HP Charge), the Super HP Charge ability will be the end result.

Ace has four specialized variants of Cut Cards that are unlocked at higher levels, each of which has a higher chance of drawing a certain type of card; Attack Hand for Burst cards, Support Hand for Short Stop cards, Life Hand for HP Charge cards, and Spirit Hand for MP Charge cards.

Cut Cards is Ace's unique EX Skill. When the

button is pressed, Ace will draw one randomly colored card; up to a maximum of four cards can be stockpiled for later use, and for every card pulled afterward, the oldest card is discarded. Cut Cards has a cooldown time of 10 seconds between uses.

The player can then use Ace's second unique EX Skill, Show of Hands, to use the drawn cards to perform a special ability by holding

. The effect is determined by the number and color of the cards drawn. The color with the most cards will take precedence, and once the ability is used all cards will disappear. Holding one card of each color, the most recently drawn color will be used. Cut Cards abilities max out at three cards of the same color. The resulting effect can be one of the following: 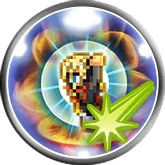