A ring forged from metal inhabited by spirits.

The Cursed Ring (呪いの指輪, Noroi no Yubiwa? or カーズリング, Kāzu Ringu?), also known as Curse Ring and Hex Ring, is a recurring accessory in the Final Fantasy series. As its name implies, it gives a large boost of strength, but at a cost of inflicting the wearer with negative effects, usually the Doom status.

The Cursed Ring gives -15 Strength, Stamina, Agility, Intelligence, Spirit, and -10 Evasion, but any armor the equipped character is wearing that resists a type of elemental attack will absorb that element instead. This makes it helpful if the player has four Cursed Rings and Adamant Armor against Geryon. Because the game does not have accessories, the Cursed Ring is classified as an armlet.

It can be dropped from Soul, Spirit, Belphegor, Evil Dreamer, Bone Dragon, Dinozombie, and Chimerageist.

Cursed Ring can be equipped by every character. It drops from Soul found in the Mt. Hobs. It has a Defense and Magic Defense of 0, Evasion of -10, and grants a bonus of -15 Strength, Stamina, Agility, Intelligence, and Spirit, but it changes elemental resistance into absorption.

The Cursed Ring is an armor that provides -10% Evasion and -5% Magic Evasion, as well as -15 to all stats, but turns elemental resistance into absorption. It is dropped by Soul, Spirit, Belphegor, Evil Flame, and Evil Dreamer.

The Cursed Ring (Hex Ring in Final Fantasy Anthology) casts Doom on the wearer, but has 25 Defense, 5 Magic Defense, and +10 Magic Evasion, and thus among the best defensive stats. It can be found in the Pyramid of Moore and stolen from Hades and Fury.

Ring said to have been forged by Death himself. Casts Doom on the wearer at the start of battle.

The Cursed Ring casts Doom on the wearer and teaches Banish at a x5 rate. It has been rumored the Cursed Ring can be uncursed like the Cursed Shield and turned into a "Paladin Ring", but this is false (the Final Fantasy III Players Guide incorrectly states it turns into the Hero's Ring).

It can be morphed from Ahriman, Daedalus or Behemoth King (Undead) with Ragnarok. It can also be obtained by betting the Cursed Shield in the Dragon's Neck Coliseum after defeating a Daedalus (not recommended due to the sheer usefulness of the Paladin's Shield). Betting the Cursed Ring can net the player an Air Anchor after defeating a Muud Suud, which is also advised against.

The Cursed Ring works well in conjunction with the Lich Ring (Relic Ring), which makes the player undead, as this means the Cursed Ring auto-revives said undead player when the Doom (Condemned) timer expires.

The Curse Ring gives +35 Strength and Magic, +15 Vitality, Spirit, and Dexterity, and +10 Luck, but inflicts the wearer with Death Sentence. It is obtained in Mideel before its destruction by observing the locked door in a shop and then finding a key between the boards on the bridge outside and trying the key in the door, then telling the truth to the shop owner. It can also be stolen from Ultimate Weapon. If the player misses the chance to acquire the Curse Ring on either of these occasions, it cannot be found anywhere else.

The Curse Ring can be useful when paired with Tifa's Powersoul or Master Fist weapons, as the Death Sentence status makes her deal quadruple the normal damage with Powersoul, and triple damage with the Master Fist. Either of these setups can have their damage output increased via having Tifa in critical health in the case of the former, or suffering from various status ailments in the case of the latter.

The Curse Ring is particularly beneficial when combined with the Added Effect and Destruct or Odin Materia linked in a character's armor, as this will negate the Instant Death effect caused by Death Sentence. The Enemy Skill Death Force also protects the user when cast. (It can be learned from Adamantaimai on the beaches of Wutai.)

Even if the wearer is protected against Instant Death, the countdown until Death still occurs (60 tics). When the countdown is over, the character won't die. If the player does not guard against Death, and is revived, Death Sentence status won't be reapplied.

The Cursed Ring gives +10% to HP, MP, and AP, and +10 to Strength, Vitality, Magic, Spirit, and Luck. It inflicts Curse, preventing the reels on the Digital Mind Wave from spinning. The Cursed Ring can be found in the very beginning of the game: after fighting the Behemoth, Zack is transported back to the Shinra Building and Kunsel asks him to check the lockers. The first time doing so yields a Bronze Bangle, but if Zack continues checking the lockers 20 more times, Kunsel will give him a Cursed Ring. If missed, the ring can still be acquired during missions later.

The Cursed Ring gives +1 Attack, Magick, Speed, and immunity to Traitor, but makes the user an undead. The Cursed Ring can be found with Treasure Hunter on the sixth floor of the Midlight's Deep.

The Curse Ring is an accessory that gives the wearer a 10% chance of inflicting Curse with a normal attack. The accessory is dropped by Ghouls and can be stolen from Aire's Doppelganger.

The Cursed Ring is a 5 star rarity accessory obtained after defeating Ultimate ExDeath on the Successors of the Dawn event. It gives +15 DEF and +20 MAG.

An ominous-looking ring from a faraway world. Notable for its unsettling design, which mimics the shape of a human skull. When equipped, it boosts attack power, magic, and HP, but it inflicts damage on the wearer when they encounter an enemy. In its home world, this precious item was apparently quite hard to find.

Curse Ring is an accessory that provides +20 ATK, +20 MAG, and HP +20%, but inflicts a fixed 2000 damage at the start of battle. It can be obtained from the Final Fantasy VII event, Da-chao Statue. 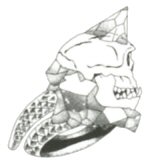 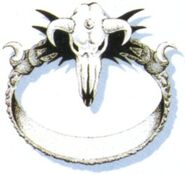