Curse of the five wyrms

The curse of the five wyrms (5匹の魔竜の呪い, gohiki no maryuu no noroi?, lit. curse of the five demon dragons), also known as the Dragon's Curse, is a trick used by Xande in Final Fantasy III. When the Warriors of Light come to battle him at the top of the Crystal Tower, Xande captures them with a mirror and five Wyrm statues that hold the curse's power. When the party is afflicted by the curse of the five wyrms, they cannot move until five people of pure heart appear to rescue them. Thinking this is impossible, Xande believes he has won.

However, Doga traveled around the world, teleporting five people the party had met during their journey. The five people are Sara Altney, Cid Haze, Desch, Prince Alus, and one of the Fellows. With their help, the party escapes from the curse and defeats Xande. 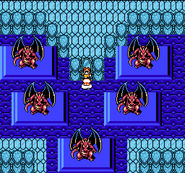