Curse status halves the afflicted target's Attack, Defense, and Magic Power, making them weaker and easier to defeat. Curse lasts after battle until cured with a Cross or Lv.2+ Esuna.

The Ancient Sword can inflict this status on an enemy, although it has a low chance of being inflicted on enemies with high Magic Defense.

The Curse status halves base strength and defense attributes. It can be cured by using a Cross or casting Esuna. In the 3D versions, the status reduces all attributes by 20%, and players can inflict it on enemies through the Curse Augment.

The Curse status halves base strength and defense attributes. It can be cured by using Esuna.

When Zack is afflicted with Curse, the DMW will stop spinning. The Cursed Ring accessory grants a stat increase while inflicting a permanent Curse status, while the Heike Soul accessory "unleashes all kinds of powers, but with a curse". It is won after completing every mission.

A cursed character is incapable of performing a Limit Break. It can be cured with a Remedy, Remedy+, Tent, Esuna, an Aura Stone, Aura, or the Treatment command. The player can also protect against it with ST-Def junctions and the Ribbon.

The status lasts around 21.3 seconds. If a character has chosen their Limit Break before Curse is in effect, the Limit Break is still used. Cursed characters have a dark glow to them.

Curse prevents characters from using their Overdrives, and stops their Overdrive gauge from filling. Curse is one of the few status ailments that aeons are not protected against. It can be cured by using Dispel or a Holy Water. For the Magus Sisters, Curse only stops their gauges from filling when they're targeted by an attack.

Curseproof protects a unit against Curse. Curse Ward is a dummied ability that works the same as Curseproof; the reason for this is that, unlike the majority of statuses which have infliction chances and resistance amounts, Curse operates—much like most of the positive statuses—on a basis of either being immune or not; there is no in-between.

Although Curse cannot be inflicted on enemies under normal circumstances, some are susceptible to it. It has no effect on them, however, even should they have an Overdrive gauge.

Curse prohibits the party from changing their dresspheres.

Curse affects items, not characters. Cursed items cannot be used and equipped items that become cursed cannot be removed. It does not wear off on its own. It can be cured by reading the Cursebreaking folio, or by the Alchemist's ability Item Esuna.

Curse (呪い, Noroi?) combines a general drop in abilities, a temporary reduction in maximum HP and MP, and also slowing physical movement speed notably. Different creatures have different strength of curses. Some, such as ghost types, have relatively weak curses that only reduce HP and MP by about 25%. Others, like the Rank 3 dragons fought in Burning Circle battles, can reduce players' max HP and MP by as much as 75%. Curse can be removed by Cursna or Holy Water.

Doom (死の宣告, shi no senkoku?, lit. death sentence) is also categorized as a curse and while it can be cured by Cursna or Holy Water, the likelihood of this succeeding is low.

A few rare monsters use a special, more powerful form of curse once known as "ST20" (because this was displayed instead of an actual effect name in the game's log window when the effect was first introduced) and now often referred to as "Zombie", which prevents the affected character from recovering any HP or MP by any means until the effect is removed. Officially, the status effect is still called Curse but the help text distinguishes it as a "powerful" curse and the game engine internally considers it to be a separate status effect than any of the other three types of curse statuses.

Finally, there is an extremely rare form of Curse status, called Bane (呪詛, juso?, lit. curse), which reduces the afflicted characters maximum HP and MP by a large percentage, and gives the effect of weight. It can be acquired from the normal attacks of Lost Souls in The Eldieme Necropolis, or from the Bane attack of the Notorious Monster Fear Gorta in Abyssea. It exists seemingly for the sole purpose of being collected by the player for a quest, 'Catch It If You Can!' which involves a tarutaru mage seeking to treat extremely rare status ailments.

Curse decreases the afflicted's chances to interrupt an opponent's actions and increases the chances of their own actions being interrupted (-20 Cut and Keep). It can be removed by Esuna or Holy Water, and can be cancelled out with the Vigilance status.

Curse functions similarly to before, but causes 33% more wound damage to be inflicted to the target rather than affecting Cut. It can be removed with a Unicorn Horn, Esuna, Holy Water, or Remedy, and cancelled out with the Vigilance status.

Curse functions similarly to before, decreasing Keep by 15. Lightning can inflict Curse upon her opponents with the Curse and Cursega spells, and if afflicted herself, can heal it with Remedy or Mega Remedy. It expires on its own after a time. The Stagger effect Cursed reduces Keep by 25.

Curse causes the affected character's stats to be cut in half. It is removed by the use of the Clear Magicite or when it wears off.

This section about a status effect in Final Fantasy Crystal Chronicles: Ring of Fates is empty or needs to be expanded. You can help the Final Fantasy Wiki by expanding it.

Units in Curs status suffer the penalty of having their stats reduced. It can be removed with the Symbol item.

A unit that is cursed will suffer by having a reduce attack power and defense, cure with Curse potion or the Heal ability. This status last even after battle.

A character inflicted with curse will be reduced to half defense and half magic defense. This can be removed by Heal, Pure, Cycle, and Elixir. There is also another kind of curse found on the Muramas, when the equipped character attacks with it, 50% of the total damage dealt is inflicted back on the cursed character.

Curse prevents characters from using class abilities for the duration of the battle. It can be cured with a Cross, a Remedy, or Esuna.

This section about a status effect in Final Fantasy: The 4 Heroes of Light is empty or needs to be expanded. You can help the Final Fantasy Wiki by expanding it.

Curse is a status effect Exdeath can inflict on enemies while in his Hexer mode by simply hitting enemies with Bravery attacks, decreasing their offense, defense and mobility.

Curse is a status effect that lowers base stats. It is cured with a Sacred Candle. 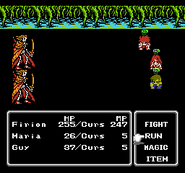 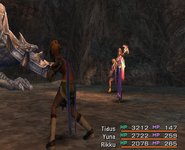 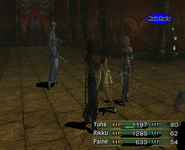