Cid Pollendina: Oh, shut up and help me remodel the Currency page!
Please expand this article into a full one. The following tasks need to be completed:This request can be discussed on the associated discussion page. Remove this notice upon completion. 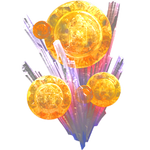 Currency is a recurring feature in the Final Fantasy series. Aside from the popular Gil, which has seen an appearance in every game and is the currency most often used, there are also several other alternative forms of currency, which can appear in specific areas or regions, used either for a specific purpose, or as that region's currency.

GP is used as a form of currency in the Gold Saucer. GP is most often won through games in the Wonder Square, or races in the Chocobo Square. It can also be bought from a man who sometimes appears at the entrance to the Gold Saucer, at an exchange rate of 100 Gil to 1 GP. GP can be used to play certain games, such as the Speed Square, rest at the Inn in the Ghost Square, fight battles at the Battle Square, and can also be exchanged for prizes with a woman in the Wonder Square.

Item exchange rates are as follows:

*Available only after Gold Saucer reopens on disc 2, only one available.

Battle Points, also known as BP, are scored through winning fights in the Battle Square. Fights cost 10 GP to participate, and players are awarded BP based on the amount and difficulty of handicaps received, and the number and difficulty of opponents defeated. The BP is lost if the player leaves the Battle Arena without expending all points.

Below is a list of items that can be exchanged for BP:

Moggie at the Sector 5 Slums sells several rare items in his Moogle Emporium shop. All costs are in moogle medals.

Beastcoins are a currency used by Beastmen. They are minted by the Quadav in gold, Goblins in silver, and Yagudo in bronze form. Beastcoins can be dropped or stolen from Beastmen, especially Goblins. Although beastcoins have no immediately noticeable use for the Enlightened Races of Vana'diel, blacksmiths can melt the beastcoins down to their base metals, allowing for them to be used as materials in smithing.

While circulated mainly only among Beastmen, sometimes during quests or missions, Beastmen or even enlightened individuals request beastcoins from players.

Conquest Points are earned through defeating opponents in areas subject to Conquest while under the Signet status.

The formula for calculating CP earned is as follows:

Regional Modifier is 1 if the area is under the player's nation's control, or 1.5 if under another nation's or Beastmen control. Conquest Points can be exchanged for a variety of rewards, depending on what Nation the player serves and their Rank within them.

Tabs are earned in Fields of Valor and Grounds of Valor. They can be used to purchase Field Support (status enhancements and teleportation services) and Advanced Training (access to Notorious Monsters that allow players to augment their equipment).

Sparks of Eminence are earned by completing the many Records of Eminence. They cap at 99,999. They can be exchanged for items and equipment at A.M.A.N. NPCs.

A substantial amount of ancient currency is required for players wishing to forge Relic Weapons. It can be found in Dynamis and in Campaign Battles. There are three types of Ancient Currency, one for each nation—Byne Bills for Bastok, "Pieces" (coins) for San d'Oria, Shells for Windurst. Each is available in (and can be converted among) three denominations: 1-unit, 100-unit, 10,000-unit. All types and denominations are stackable to 99.

Ancient beastcoins are used to purchase certain items related to Limbus. It can be obtained in Apollyon and Temenos.

Imperial Currency is a form of currency used in Aht Urhgan in order to buy certain goods and services. While most areas take gil as readily as imperial currency, imperial currency is required for certain things, such as passing into the Alzadaal Undersea Ruins or creating Blue Mage armor. Imperial Standing can be traded for Imperial Currency, at a rate of 20 for a Bronze Piece, 100 for a Silver Piece, 200 for a Mythril Piece, and 1,000 for a Gold Piece.

The rate of earned experience is:

With certain conditions, such as the Astral Candescence present in Al Zahbi, boosting the rate of Imperial Standing earned. Imperial Standing can be exchanged for things such as maps of Near Eastern areas and equipment of Aht Urhgan.

Players will receive ampoules of Therion Ichor depending on the number and type of enemies they defeat in the chamber during Einherjar battles. These can be used to purchase various valuable items from Kilusha in Nashmau.

Chocobucks are won from competing in Free Runs or from turning in Chocobuck Slips obtained from the Chocobo Hot and Cold Game. They can be used as an entry fee into official races, or to buy a variety of items useful in raising Chocobos.

Allied Notes are used for teleporting from an Allied nation to a field area and switching nations. They are also used to purchase items.

Cruor is the currency used in Abyssea, as a substitute for gil. Cruor is more than an ornamental currency, as it is used to power objects like the Veridical Conflux. It is earned by defeating monsters in the realm, and also as a reward from some chests and some quests.

Dominion Notes can be obtained by taking part in Dominion Ops. They can be used to obtain items, and empyrean armor from a Dominion Tactician.

Bayld is the standard currency of Adoulin. It can be obtained by killing certain monsters, participating in Reives, and completing Adoulin Quests and Coalition Assignments. They can be used to purchase various items from many vendors.

Casino Coins are used as currency in Serendipity and can be purchased at the exchange desk in the house with the card tables and the slot machines, or won by playing Serendipity's minigames. The player can exchange their coins for various prizes.

Guild Marks was currency used in most of the Guilds. the currency was used exclusively at the guild of its origin, often in order to trade for Discipline-specific abilities or Crystals. Guild Marks could be earned by completing certain Guildleves as the Discipline the Mark belongs to. Guild marks were abolished in patch 1.20 but could still be used to purchase materia until A Realm Reborn was released.

Faction Points were earned by completing regional guildleves, and are used to participate in faction levequests, which are harder than regular levequests but give more experience, gil, items and sometimes access to unique gear or Notorious Monsters. This has been phased out with A Realm Reborn.

Company Seals are currency used in the Grand Companies to acquire unique equipment, advance in company ranks or buy special items such as a Chocobo License.

An unusual "currency", Allagan Tomestones are artifacts of an ancient civilization that can be traded to an antiquities dealer named Rowena for various endgame equipment and miscellaneous items.

Introduced in patch 2.1, Beastman Currencies are assorted currencies used by the various Beastmen tribes and used to buy items from their respective merchants. Prior to patch 4.1, Beastman currencies were items stored in the player's inventory. Each beastman tribe has its own unique currency.

Introduced in Heavensward, Crafters' Scrip and Gatherers' Scrip are a currency created by Rowena and used to purchase items and equipment related to crafting and gathering from her stores.

Medals can be earned by betting on monsters in the Totomostro minigame in Altissia, which can then be spent on various prizes.

In the Adventurer from Another World quest, the player can expend Allagan Tomestones at Y'jhimei's trading post. The tomestones are found scattered about the Perpetouss Keep and earned from fighting Garuda.

SPP Points amassed by accepting support personnel during missions is used to buy items and equipment in the SPP Post in the Central Command room in Akademeia. Support personnel accumulate SPP just by being present, but lose the points if they die.

Amassing SPP also unlocks new items for purchase in the SPP Post, and raises the SP rank in certain intervals.

In the Maxima version, some battles in the Coliseum reward Arma Gems. They can additionally be used to purchase Champion Jewels from the Girl Who Forgot Her Name after clearing Chapter 10.