Non-player character
Lady Curilla V Mecru is a non-playable Elvaan character in Final Fantasy XI. She is the leader of the Temple Knights of Chateau d'Oraguille in San d'Oria. She plays an important part in Red Mage's Artifact Armor quests. These center around her deceased father, Rainemard, who was a powerful Red Mage in the royal court.

She is also the quest-giver for the "Savage Blade" sword weaponskill quest. Curilla has been Prince Trion's sparring partner since she was twelve years old and at present, she is arguably the most skilled swordsmaster in all of Vana'diel (with Prince Trion ranking second, Archduke Kam'lanaut in third, Tenzen as fourth, and Wolfgang rounding off the top-five list).

Due to an accident whilst competing against Prince Trion in the finals of the highly prestigious "Sword Tournament", she damaged one of her eyes. Having perfectly mastered the art of the "Savage Blade", she had intended to use it as her finishing move against her childhood friend Trion, and at the last second, had avoided making the hit when she realized how intense the force was involved. The force was so powerful that it shattered her blade, and one of its shards pierced her eye.

She considers it a punishment for longing to hear the crowd chant her name in glory; and surprisingly, she also considers herself to be ugly as well (due to her disfigured eye). However, everyone who meets her is awe-struck by her magnificent red-headed beauty. It has baffled many people as to why she continues to see herself as ugly; yet none would dare drum up the courage to ask her, especially since she is considered as the greatest swordsmaster in Vana'diel. There are also heavy rumors that she has a secret admirer in Prince Trion of the Royal Family.

An alter ego, or "cipher", of Curilla may be summoned by the Adventurer to assist them in combat under the Trust system.

Even the mightiest birds give their all when hunting the smallest of prey!

Curilla is available as a Trust Magic to the Adventurer who has completed their rank 3 mission. The Adventurer must speak to her in Chateau d'Oraguille after completing the San d'Oria Trust initiation quest. Her job is Paladin and she is equipped with a sword and shield. She will attempt to keep the enemy's attention directed at her through use of sword weapon skills, Cure spells, Flash, and the Paladin job's Sentinel ability.

Curilla has appeared in the following media throughout the Final Fantasy series: 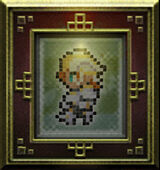 Curilla depicted in the "Guardian Board" furnishing.