Curaja (CUR4 on the NES and Cure4 in Final Fantasy Origins) is a level 7 White Magic spell, which fully restores the HP of a single ally. The NES version of the spell also acts as Esuna by removing all negative statuses except petrification.

The spell can be bought at Gaia and is learned by the White Wizard job class. In the Dawn of Souls and 20th Anniversary Edition releases it costs 35 MP to cast.

Chaos uses Curaja to fully heal himself during the final battle.

Curaja (Cure 4 in Easy Type) is the strongest White Magic healing spell that Rosa, Tellah, Porom, and Fusoya. It has a casting time of 0, and costs 40 MP to cast. In 2D versions it has a spell power of 288, and in 3D versions it has spell power of 128. It never misses. In the SNES version, any value greater than 16,384 healed from the spell will restore MP instead.

Curaja is a White Magic spell learned by Rosa (level 38) and Porom (level 48). It restores all HP to one or major HP to all allies, and can also be used to damage the undead. It costs 40 MP to cast.

Moogle Cureja is a spell exclusive to Yuna's Mascot dressphere. It restores about 60% of the party's MAX HP and removes negative status effects from the party. It costs 15 MP to cast, and can be learned for 40 AP.

Curaja restores a large amount of HP to all allies in range, and can deal high damage to groups of undead enemies when cast on them.

In the original version Curaja is a White Magick 6 license that costs 45 LP to learn and (initially) 68 MP to use. The spell can be bought at Balfonheim Port after the events in Draklor Laboratory for 11,700 gil.

In the Zodiac versions, Curaja is a White Magick 9 license and can be used by the White Mage, Monk, and Knight. The Monk must unlock a 75 LP Quickening license first, and the Knight must acquire the license for Hashmal first.

Curaja (Curada in the Japanese version) is a Medic ability that restores HP to the target and nearby allies proportional to the amount of damage each has taken. It has an ATB cost of 2. It is learned by Noel (role level 35).

It is also an enemy ability used by Lightning.

Curaja is used by the Angel of Valhalla in battle after fully recovering from its wounds. It restores HP to one target, restoring more the lower the target's HP is.

Cure IV is used exclusively by Kuribu, the final boss of the Lost City of Amdapor (Hard). The spell's effectiveness varies based on the party's proximity to the boss; the closer the party is to Kuribu, the less it is healed. When Kuribu is under Reverse, the spell instead targets the party and deals damage. In this case, the party must move as far away from the boss as possible in order to minimize the damage they take.

Curaja is the most powerful healing spell for White Mages. It cost 800 JP to learn. It has a speed of 10 and costs 20 MP to use. The spell heals a lot of HP and cannot be reflected. Curaja has a 40% chance of being randomly learned in battle if cast on a White Mage that has not learned the spell yet and is healed at least 1 HP.

Curaja restores nearby allies to full health. It is cast by piling four Cure spells.

Curaja restores nearby allies to full health. It can be cast by stacking four Cure spells.

Curaja (Carega/Curaga in Japanese release) is a 4★ White Magic. It restores a very large amount of HP to one target, it can initially be used four times and it can be honed to rank 5. It can be created by using Greater White Orb x5, Greater Wind Orb x3, Greater Holy Orb x3, and 10000 gil.

There is also 6★ White Magic Curada (Careja/Curaja in Japanese release) obtainable upon completing its Nightmare cycle, located at 8:00 in the Nightmare hall. It is described as bestowing a limited Regen effect along with the usual HP recovery.

Curaja is a tier four healing spell. It can be unlocked by having 2 members in a stack with tier three healing spells. 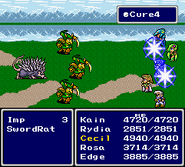