Curada is a stronger restorative White Magic spell, usually obtained at the midpoint in most titles. In earlier titles featuring four tier Cure spells, Curada often serves as the fourth tier of the line. However starting from Final Fantasy V, the four tier system would often be discarded, with Curaga being the third and strongest of Cure spells, while Curada is often left out.

In titles featuring four tiers of Cure spells, Curada is often localized under the name of "Curaga", with the recurring Curaga spell in Japanese being localized as "Curaja" (see below). However, later localized titles have begun to use the name Curada for the third tier. Curada has also gone under several other names, including Cure3, Cure 3, Curaja, and Cure V.

Restores a lot of HP to one ally.

Curaga (CUR3 on the NES and Cure3 in Final Fantasy Origins) is a Level 5 White Magic spell that restores a large amount of HP to a single target. In the NES and Origins releases, it restores between 66 and 132 HP, while in subsequent releases it restores HP depending on the caster's Intelligence.

The spell can be bought at Melmond and can be learned by the White Mage, White Wizard, Red Mage, and Red Wizard job classes. In the Dawn of Souls and 20th Anniversary Edition releases it costs 20 MP to cast. It costs 4,000 gil in the remakes and 8,000 gil in the original NES version. The Dark Fighter is the only enemy capable of casting this spell. A Rune Axe can be used to cast Curaga when used as an item.

Curaga is a Level 5 White Magic spell bought in Northeast Saronia, Doga's Manor, and in Doga's Village for 5,000 gil. It can be used by White Mage, Devout, Sage andOnion Knight. It has a base power of 180.

It is learned by Rosa (level 31), Porom (level 33) and Fusoya (initially). Curaga can be cast by Deathmask, Lunar Asura, and Asura.

Curaga is a White Magic spell. It restores major HP to one or moderate HP to all allies, and it can also be use to damage the undead. It costs 18 MP to cast. It is initially known by Rosa and Porom.

Curaga is a White Magic spell that restores a moderate amount of HP. It costs 18 MP to cast. It is is learned by Rosa (default), Fusoya (default), Ceodore (level 49), Porom (level 33), and Leonora (level 45).

Curaga the is the third strongest curative White Magick spell. It restores HP to one target.

In the original version it can be bought in Eruyt Village for 3,200 gil. Late in the game, various other vendors sell it as well. It is unlocked with the White Magick 5 license which costs 45 LP. It takes (initially) 28 MP to cast.

In the Zodiac versions, Curaga is a White Magick 6 license and can be used by the White Mage, the Red Battlemage, and the Knight. It can be bought from Mt Bur-Omisace for 2,400 gil. It is also a treasure with the Diamond Armlet equipped in Stage 71 of the Trial Mode.

Because of the Effect Capacity system hindering players from performing special actions or magick spells (as only a limited amount can be performed at once), casting Cura and Curaga under Faith status instead of Curaja is more efficient in the PlayStation 2 versions, and they consume less MP as well, meaning Curaga is still useful even after obtaining the higher-class spell Curaja. In The Zodiac Age, this restriction is no longer in place.

Curaja is a Medic ability that restores HP to the target and nearby allies proportional to the amount of damage each has taken. It has an ATB cost of 2. It is learned by Noel (role level 35).

It is also an enemy ability used by Lightning.

Curaja is used by the Angel of Valhalla in battle after fully recovering from its wounds. It restores HP to one target, restoring more the lower the target's HP is.

Curaja is the third tier of Cure White Magic, restoring a heavy amount of HP to one person, while restoring a moderate amount to the entire party. It costs 3,000 gil and costs 26 MP to cast. It can naturally be used by White Mages, Seers, and Red Mages.

In the original free-to-play versions, the Curada I (ケアルダ I, Kearuda I?, lit. Careda I) ability appeared as the sole ability of the Agnès signet. It restored a moderate amount of HP to a single ally and granted them continuous heal for three turns.

Curaga is a White Magic ability with a Rarity of 3☆. It restores a large amount of HP to one target, it can initially be used four times and it can be honed to Rank 5. It can be created by using White Orb x5, Wind Orb x3, Minor Holy Orb x3, and 5000 gil.

In the global English localization, Curada is used as the name for the Curaja ability.

Curada is a craftable White Magic ability for players to obtain, while also being an ability naturally learned by specific Visions. It restores HP to a single target with the following formula: 800 HP x 3.4. In order to craft Curada, players are required to have several materials - Light Cryst x15, Light Megacryst x10, Life Orb x10, Cura x3, Alcryst x1

Curada is an intermediate White Magic spell available to those with the White Mage job. Curada restores a moderate amount of HP to a single target. The spell costs 17 TP to perform, has a height range of 2, and can only be used 6 times in battle.

Curada has appeared in other Square Enix titles as an ability, referencing the Final Fantasy version of the spell.

Curada is featured as a recurring White Magic spell in the Bravely series, serving as the third tier healing White Magic spell in titles associated with the first Bravely Default. The spell restores a large amount of HP to a single party member, while restoring a moderate amount of HP to all party members. Bravely Default II abondons the Curada spell of its predecessors, making Curaga the third and final tier available for White Mages in the title.

More recent titles have attempted to rectify this decision, with both Final Fantasy Brave Exvius titles and several installments of the Bravely series using Curada in the English localizations as the third tier, with Curaga being the final tier. 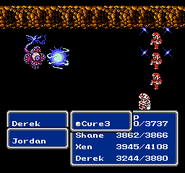 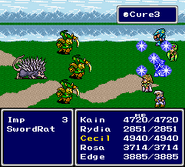