The Cultists' Tower, also known as Tower of Fanatics, is a location in the World of Ruin in Final Fantasy VI. It was built and is inhabited by the Cult of Kefka, a group that worships Kefka Palazzo. The tower lies along the Serpent Trench surrounded by mountains, and so is only accessible by the Falcon.

Battles in the Cultists' Tower no longer count toward lifting the curse on the Cursed Shield in Pixel Remaster.

The tower is said to house a great treasure and thieves frequently attempt to scale it, coming out empty-handed or not at all due to the tower's security measures. When the party visits the tower they find several cultists march in circles in front of it, including Strago. If Relm is in the party, she will call out to him and snap Strago to his senses, and he will rejoin them.

If the party climbs the tower they find a rare relic at the top, the Soul of Thamasa. After they take the treasure the cultists surround the party demanding for its return, and the cult's leader attacks the party. The leader is defeated and the cultists disappear.

Each area of the Fanatics Tower has a room with a single treasure chest. The first room has a Safety Bit, the second room has a Genji Shield, the third room has a Kagenui, and the fourth room has Force Armor. The room atop the tower contains the Soul of Thamasa.

There is a hidden, fifth treasure room, accessed by hitting a secret switch in the first treasure room on the wall to the right of the treasure chest. This room contains the Air Anchor, Edgar's final Tool.

Additionally, after defeating the Holy Dragon, the player will receive the Holy Lance. This item is received in a different manner from usual enemy item drops, being given in a scripted event when the player defeats the Holy Dragon.

A gang of thieves outside the tower offers to sell the player information for 100,000 gil. The information hints to the existence of the Ancient Castle beneath Figaro Castle, and also tells the player the owner of the weapon shop in Narshe wants to see them. The player does not need to purchase the hint to gain access to these sidequests, the thief is merely a way for them to learn of them.

To re-recruit Strago in the World of Ruin, the player must enter the tower with Relm in the party. Relm joins the party at Owzer's Mansion, and if Shadow was not saved at the Floating Continent, she must be rescued from the Cave on the Veldt first. As soon as the player enters the base of the tower with Relm present, a cutscene begins where she calls out to Strago and snaps him to his senses, and he will rejoin the party.

The Cultists' Tower has a unique mechanic where all commands other than Item and Magic are disabled. Because of how the scripting for this works, Gogo must be equipped with the Attack command, which will become the Magic command, but his Magic learnset will remain the same. Umaro is able to attack within the tower normally. The player can also get around this by the Berserk status, and by way of the Thief's Knife, a Berserked character can attempt to Steal.

The party fighting the Holy Dragon (top) and the Magic Master (bottom).

The higher the player goes, the stronger the enemies become, mostly consisting of "Magic" enemies of escalating level (despite their names, the level in their name is indicative of their HP in multiples of 1,000, not their actual level). All enemies in the dungeon use magic exclusively and many of them have innate Reflect status or can cast Reflect. Thus, the player may wish to equip the party with Reflect Rings to reliably bounce spells off their party members onto enemies; otherwise, rely on spells that ignore Reflect.

At the top lies the unique relic Soul of Thamasa, but entering the treasure room summons the cult to surround the party and their leader, the Magic Master, attacks the party. Additionally, the Holy Dragon, one of the eight legendary dragons, resides in one of the third ascent's treasure rooms.

There are no save points in the tower and Teleport is not allowed, so the player should be sure their party is strong enough to survive the ascent, defeat the bosses, and then descend afterward. For this reason, the Cultists' Tower is generally best left until late in the game, when the party will be at a high level and the player has access to more powerful Espers with better magic to teach than what they may initially have in the World of Ruin.

"The Fanatics" from Final Fantasy VI

"The Fanatics" is the background theme of the Cultists' Tower. It is an ominous theme with various chimes and later a deep male chorus humming. The TOSE rendition omits the deep male chorus and and instead replaces it with a vaguely female chorus. It also plays when the Returners confront Kefka at the top of his tower.

The tower is host to a handful of glitches. If the player were to open a door in the tower while having their gamma on their screen high enough, they would be able to see the background moving through the top half of the doorway. When the player engages the Holy Dragon, the camera will move to center on the party, and it will not move back after the battle. This is fixed by leaving and re-entering the room. 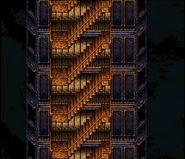 The floors of the Cultists' Tower. 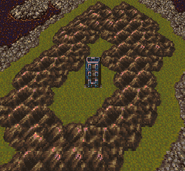 The cultists surround the party (2014 mobile/Steam).