When ye pour yer 'eart an' soul into a dish only to 'ave a patron call it slop, will ye swallow yer pride an' start again, or will ye run 'ome cryin'? Words cut deeper'n knives, 'venturer. An' when yer pride's been 'acked to shred, passion's the only thing as keeps ye standin' in front o' the stove.

The Culinarian is a Disciple of the Hand in Final Fantasy XIV.

Culinarians preside over the world of cuisine, preparing every known consumable in Eorzea. Armed with a cornucopia of ingredients from across the realm, and versed in methods from the far corners of the Source, these master chefs help adventurers maintain their strength on the battlefield.
Of all the city-states of Eorzea, Limsa Lominsa boasts the richest culinary tradition, a product of its proximity to fertile lands and plentiful seas, and its standing as the realm's foremost trading port.

Whetting appetites from dawn until dusk with prowess of pot and pan, culinarians provide more than simple sustenance. Armed with a cornucopia of ingredients from across the realm, and versed in methods from the far corners of Hydaelyn, these master chefs help adventurers maintain their strength on the battlefield, bringing truth to the age-old adage that the road to victory truly does run through one’s stomach.

Although an established trade far before recorded history, it wasn't until half a century ago when Limsa Lominsan admiral and self-proclaimed gourmand, Guolskyf Bhaldwaensyn, known by the masses as "Mastcleaver", put forth a thalassocratic decree proclaiming the culinary arts a guildworthy craft. Henceforth, it has been recognized across Eorzea as a legitimate member of the Tradescraft Society—its recipe compendiums now grace the shelves of every librarium in the realm.

Culinarians can prepare meals for use by adventurers, such as drinks, steaks, soups, and bread. Some elaborate dinner sets can also be created to be placed in player housing.

As they are the only Disciple of the Hand that does not create equipment, their desynthesis skill is instead used with seafood caught by Fishers. Culinarians also depend on the ingredients gathered by Botanists.

Culinarians use skillets as their primary tool and culinary knives as their secondary. Their armor is primarily made up of "Crafting" gear that they share with other disciples of the hand. Crafting gear provides bonuses to the craftsmanship, control, and CP attributes. Craftsmanship and control respectively improve their progress and quality gains when crafting. CP is the resource they use in place of MP for their abilities.

Soul of the Culinarian is equipped. 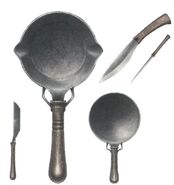