Liam O'Brien
Cu Chaspel is an antagonist in Final Fantasy Crystal Chronicles: Ring of Fates. He is the servant of Galdes.

It's been nine years... I thought you should be long dead by now...

Several years before the beginning of Ring of Fates, Chaspel had been ordered to force all of Princess Tilika's power at the bottom of Rela Cyel as a sacrifice to the Moongod, which resulted in Princess Tilika dying and Rela Cyel's destruction.

Some years later, the Starsinger Aleria gave birth to the twins Yuri and Chelinka. Chaspel appeared and demanded she hand one of the twins over, supposedly acting under the orders of the Crystal Temple in order to invoke the appease of the Moongod once again, but Aleria chose to sacrifice herself instead of one of her children.

Cu Chaspel returned once again to the twins' home, where their father, Sir Latov, had been raising them ever since their birth. Chaspel demands Chelinka to be handed over, but his raid on Villa is in vain: he is wounded by Latov, though at the cost of his life, and then is driven off when the twins subconsciously invoked Chelinka's power.

Later on, while the party meets King Kolka, Chaspel attempts to kill the king and frame them, thereby removing the party and the king, paving the way for the Crystal Temple's plans. He escapes before the guards come and accuses Yuri and Chelinka of attempting to kill the king.

Chaspel appears one last time at the Crystal Temple standing between the king's army and Galdes the Hierophant. He easily defeats the soldiers but is ultimately beaten by Yuri and his friends, disintegrating into dust at the end.

In the Multiplayer game, the alternate time frame where the events of the single player game never happened, Cu Chaspel has opened a store, Chappy's Workshop, specialized in selling and buying scrolls and delivering ware orders for the player.

Even though he is supposedly gentle, he still has a strange demeanor, sometimes laughing maniacally in front of the characters. He also fights against the adventurers as one of the three bosses at the Crystal Temple. This is confirmed after completing Multiplayer Mode and talking to him at his workshop, where he says that he should not have jumped from such a high place.

He is voiced by Liam O'Brien in the English version of the game, who is also known for providing the voice of Red XIII in Final Fantasy VII: Advent Children and Kain Highwind in both Final Fantasy IV (DS) and Dissidia 012. In the game's Japanese version, his voice is provided by Mitsuaki Madono.

Cu Chaspel appears as an optional secret boss outside of the storyline in Echoes of Time. 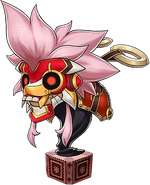 Cu Chaspel appears in the Final Fantasy Trading Card Game represented by an ice-elemental and a dark-elemental card.

The name Chaspel might come from the word "Chapel", a part of a church. This might be because of his connection to the Temple.

Cu Chaspel might also be a reference to Cú Chulainn. [view · edit · purge]Cúchulainn is an Irish mythological hero who appears in the stories of the Ulster Cycle, as well as in Scottish and Manx folklore. "Cú" is the Irish word for hound—"Cúchulainn" is literally "Hound of Chulainn". "Cúchulainn" is technically mispronounced in the series, being closer to "coo-hullen" as audible in the following reading from Irish myths by Ronnie Drew via youtube.

Cu Chaspel's name could be intended to mean 'dog of the temple' or something similar.