Such a proud and vibrant city... The sole sanctuary for the living in a world all but resigned to oblivion. Each stone was laid with hope; the town itself a symbol, a monument to defiance in the face of death. No would-be hero could fail to answer its call. For who among us does not yearn for salvation?

The Crystarium is a city of the First reflection of Hydaelyn from Final Fantasy XIV: Shadowbringers. It serves as the starting hub city for players in the expansion.

A bustling city that developed around the Crystal Tower in the years following its sudden appearance in Lakeland. It serves as a safe haven for people of all races and creeds as they join hands in the struggle against the merciless sin eaters.

During the decade following the Flood of Light, a giant spire known as the Crystal Tower emerged in Lakeland. Refugees fleeing sin eater attacks came upon the Tower and the mysterious hooded man who summoned it. He gave succor and safe haven to those who arrived, and eventually the Crystarium was formed around the Tower's base. To further strengthen the new settlement, the sage allowed the residents to explore the Tower proper and make use of the wonders lying within, technology beyond what anyone in Norvrandt had seen, and eventually the citzens came to look upon the sage as their leader. Though he did not reveal his name, they came to know him as the Crystal Exarch for his semi-crystallized appearance.

The Crystarium would grow as more and more refugees joined and banded together to fight the sin eaters, and it would frequently send members of it's own guard to help protect the nearby villages and settlements from sin eater attacks. It would eventually develop Facets, departments of industry that would grow and create supplies and hoard whatever knowledge the city's melting pot of nationalities brought with them for preservation and use in battle.

The Crystarium initially allied itself with Eulmore as the latter city-state led the battle against the sin eaters with aid from the incarnations of the Oracle of Light, however the ascension of Vauthry and subsequent change of policy of Eulmore resulted in the two city-states to enter a tense stalemate, and without the power of the Oracle, the Crystarium adopted a more defensive approach towards the eaters.

The eponymous spire of the Crystal Tower within which the Exarch resides.

The Exarch's study, where he can most often be found.

A private room containing the most important control functions for the Crystal Tower and the Crystarium's defense.

The market area of the Crystarium.

A building containing a series of personal suites for the cityfolk.

The main residential area for citizens of the Crystarium.

The Crystarium's climate may exhibit any of the following weather conditions:

"The Dark Which Illuminates the World"

The Crystarium is a near identical recreation of the unnamed city that first appeared in the Rapture demo from 2005. The city's main residential area, which cannot be visited, takes it's name from this demo.

The Crystarium from the First shares certain similarity with Ancient Allag from the Source, as both were cities built around the Crystal Tower. 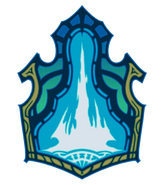 This section about a location in Final Fantasy XIV: Shadowbringers is empty or needs to be expanded. You can help the Final Fantasy Wiki by expanding it.
Final Fantasy XIV setting
Community content is available under CC-BY-SA unless otherwise noted.
Advertisement