Crystal stasis (ルシのクリスタル, rushi no kurisutaru?, lit. l'Cie's crystal) is a state a l'Cie enters upon completing his or her Focus in Final Fantasy XIII and Final Fantasy Type-0. According to legend the completion of one's Focus and entering crystal stasis grants the l'Cie eternal life.

Turning to crystal is not the sole privilege of the l'Cie, as it appears those who hold divine power, such as Bhunivelze in the Fabula Nova Crystallis: Final Fantasy mythology, can enter crystal stasis—or bestow it to others—at will. The reverse, however, the becoming of a crystalline monster known as a Cie'th, appears a sole burden of a l'Cie.

For l'Cie, successful completion of a Focus holds the promise of eternal life in the peaceful slumber of crystal stasis—or so the legends say. Yet to spend an eternity as an immobile crystal is not so very different from death. The people of Cocoon consequently fear being marked as a l'Cie, equating the fal'Cie's brand with a death sentence.

Faced with only the choice between eternal damnation as a Cie'th and eternal imprisonment in crystal, it comes as little surprise that many l'Cie decry their fate.

Etro disappeared from the Mortal Realm to the Unseen World, but what became of Pulse and Lindzei is never clarified. When Pulse brands Lightning and her companions l'Cie in Final Fantasy XIII, he emerges from a crystal in another dimension where Lightning's party is briefly transported to, but whether this indicates Pulse having entered crystal stasis is unknown.

The legend that completing one's Focus, and being encased in crystal, grants eternal life, originates from the fact a fal'Cie can call its l'Cie back from crystal stasis to give its servant a new Focus. This way, as long as a l'Cie keeps completing his or her Focus, they can enter crystal stasis multiple times and be revived to live again once their fal'Cie needs their assistance. However, this leads to a life in slavery under their fal'Cie master.

Completing a fal'Cie-given Focus is not the only way to enter crystal stasis: the Pulse legends state the goddess Etro stopped Ragnarok during the War of Transgression by placing Fang and Vanille in crystal stasis before their Focus could be completed, and Cid Raines enters crystal stasis despite having outright defied the Focus given to him by Barthandelus.

It appears the l'Cie have the power to overcome their fal'Cie-given Focus and give themselves a new one. Whether or not entering crystal stasis was done on Cid's own accord or not, Barthandelus is still able to revive him from the stasis and give him a new Focus. The Final Fantasy XIII Ultimania states that Barthandelus's act of reviving Anima, the fal'Cie who branded Vanille and Fang, from its deep sleep, in turn awakened Vanille and Fang from their stasis.

As the party fells the fal'Cie Orphan the entire party crystallize, as well as the world of Cocoon that is crystallized by Ragnarok. As revealed in Final Fantasy XIII-2, Etro was touched by the plight of Lightning and her friends, releasing them from crystal stasis almost immediately after having been placed in it, along with Serah and Dajh. Fang and Vanille remained in crystal stasis due to crystallizing themselves willingly. The act Etro committed causes a rift in time which drags Lightning away, with only Serah remembering her ever reuniting with them on Pulse's surface. This is where the story of Final Fantasy XIII-2 comes into play.

I will become an eternal epitaph. Your memory will survive for eternity within a crystal tomb.

Vanille and Fang are in crystal stasis and protecting their crystal becomes crucial when Cocoon's crystal pillar comes under threat. In the end, Sazh salvages Fang and Vanille's crystal from the pillar right before it crumbles.

At the height of her battle against Caius Ballad, Lightning realizes her actions have inadvertently caused Serah's death and the world's impending fate to be unavoidable. In the DLC episode "Requiem of the Goddess", she meets Serah's spirit, who asks Lightning not to regret sending her out to travel through time; the only thing she asks is for Lightning to always remember her. To fulfill Serah's final wish, Lightning enters crystal stasis to hold on to hope, embody Etro's will, and preserve Serah's memory. In the secret ending of "Requiem of the Goddess" Lightning awakens in a distant future.

Lightning crystallized herself because "even in the waves of chaos, it never loses its shine" and the crystal she becomes is said to be indestructible.

In a paradox ending Serah and Noel find a crystallized Vanille in Oerba.

Lightning, Vanille, and Fang have all awoken from crystal stasis. In Final Fantasy XIII: Reminiscence -tracer of memories-, Snow speculates this was Bhunivelze's doing. After her task as Bhunivelze's savior is complete, Lightning learns of the deity's true gambit and rebels against him. After severing the god's hold on humanity's souls and destroying him, Bhunivelze's remains crystallize and are consumed in Nova Chrysalia's destruction. Lightning later ponders whether Bhunivelze is truly dead and if he only entered another crystal sleep, but remains certain mankind would once again prevail even if Bhunivelze was to return.

l'Cie of Orience are branded and given a Focus by the Crystal of their nation. It is inferred that l'Cie crystallize when they die, when they complete their Focus, or simply when the Crystal deems the l'Cie's purpose has been served. A small item called a l'Cie Stone may be found at the site where the l'Cie entered stasis, and it contains the l'Cie's final thoughts.

There are three examples of crystal stasis: Qun'mi, a White Tiger l'Cie, crashes in the woods of Lorican territory after deploying an Ultima Bomb to annihilate the country. She is crystallized after willingly relinquishing her l'Cie powers to Machina. A variation of crystal stasis, known as sublimation, is shown when Lady Caetuna crystallizes after summoning the Verboten Eidolon Alexander, and shortly after, shatters. Due to circumstances regarding her penultimate release, such as the extreme summoning process regarding Verboten Eidolons and Rubrum victory in a last skirmish against Militesi forces, it is believed she served her fate to its destined conclusion, and that her contract was severed upon fulfilling her Focus, putting her to rest.

During Tempus Finis Machina, a White Tiger l'Cie, and Rem, a Vermilion Bird l'Cie, arrive at the Pandæmonium to duel each other, which leaves Rem terribly wounded. The two are soon discovered by Class Zero in crystal stasis, with Rem in Machina's arms. Following Class Zero's final battle against the Rursan Arbiter, Dr. Arecia releases Machina and Rem from their stasis for them to preserve Class Zero's legacy in a world where memories of the dead will no longer be forgotten.

Zhuyu and Nimbus enter crystal stasis during Tempus Finis, the former's being documented in a narration, and the latter's recorded in his profile in the Rubicus. Zhuyu was crystallized after defending Akademeia from the Rursan Reavers, and Nimbus entered stasis after taking Cid Aulstyne to Pandæmonium.

In the world of Orience Crystals remove the memories of the dead from the living, said to be a blessing to prevent heartache. However, crystallized l'Cie are still remembered. Some Class Zero members speculate this to be because l'Cie live such long lives no one who used to know them as mortals is left to mourn their passing. It might also mean that l'Cie in crystal stasis are not truly dead, their souls merely trapped in crystal.

Noctis's ten-year slumber inside the Crystal hearkens to the concept of crystal stasis in Fabula Nova Crystallis series, although he ages during it. Final Fantasy XV was originally part of the subseries as Final Fantasy Versus XIII.

In the Secret Episode of the Re:Mind DLC, if Sora loses against Yozora, he stumbles to the ground before crystallizing. The DLC has allusions to the early Final Fantasy Versus XIII trailers. 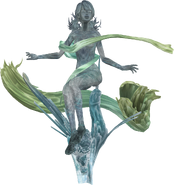 Vanille and Fang in crystal stasis. 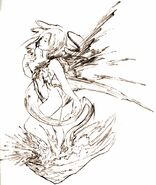 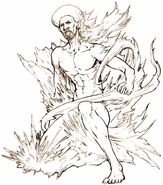 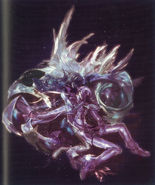