During the catastrophe of 0 AF, a gigantic crystal pillar appeared and caught Cocoon in its embrace. This miracle was the work of Fang and Vanille, two women who sacrificed themselves to achieve the impossible.

In the centuries that follow, however, erosion weakens the massive structure. This second threat to Cocoon triggers a war among its people, and the resulting violence brings the sphere crashing to the ground. The apocalyptic age in which Noel was born is what remains of the world after those tragic events come to pass.

After Orphan has been felled robbing Cocoon from its power source, and the floating continent begins to fall from the sky, Vanille and Fang transform into Ragnarok. They crystallize Cocoon's shell, build a crystal pillar from the ground up to support the structure, and crystallize themselves within the pillar and enter crystal stasis. After the others wake up from their crystal stasis on the surface of Gran Pulse they marvel at the sight of the crystal pillar, but are saddened Vanille and Fang remain trapped inside it.

After Lightning disappears, the only thing left of her is her survival knife found at the base of the crystal pillar. While the others believe Lightning to be either dead or crystallized within the pillar with Fang and Vanille, Serah Farron is certain her sister is still alive.

In 10 AF at the Yaschas Massif, it is discovered through a vision recorded in an Oracle Drive by the seeress Yeul that the pillar holding Cocoon will crumble sending the crystallized Cocoon plummeting to the surface of Pulse. According to Noel, a man hailing from a bleak future, this marks the end of days to human civilization. The vision depicts Cocoon's fall will be caused by Caius Ballad.

Serah and Noel set out to save the future and prevent Cocoon from falling, while Hope makes it the Academy's top priority to prepare for the event set to take place hundreds of years in the future.

When Serah and Noel travel to the Sunleth Waterscape in 300 AF, they find a giant flan eroding the crystal pillar and conclude the flan would weaken the pillar enough for it to send tremors on the ground, making people nervous and causing them to break out into a war, which would culminate in the pillar's full destruction. Serah and Noel solve the double paradox and defeat the flan, preventing this scenario from happening.

In the year of the prophecy, 500 AF, Serah and Noel stop Caius from destroying Cocoon and Hope's New Cocoon, and defeat him in Valhalla, restoring the timeline. Hope and Sazh remove Fang and Vanille from the pillar moments before it crumbles.

While the pillar is no longer intact, its remains can be explored in the Wildlands, the area where the old Cocoon fell, where Academia once stood, and where Chaos first entered the world.

Snow creates an ice pillar similar to the crystal pillar during his first battle with Lightning where he uses it to stop a falling chandelier. 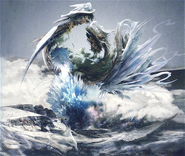 Artwork of the exterior of the crystal pillar.

Artwork of the interior of the crystal pillar.

The crystal pillar as seen from New Bodhum in 3 AF.

The crystal from the pillar in Sunleth Waterscape in Final Fantasy XIII-2.

The crystal pillar before the launch of Bhunivelze.

The remains of the pillar in Lightning Returns: Final Fantasy XIII.

The crystal pillar as depicted in the logo for Yusnaan.