Milites sure is proud of that crystal jammer of theirs. Too bad it's useless against us. If they do use the jammer again, before we can even think about destroying it, our first priority will have to be getting Machina and Rem to safety.

The crystal jammer (クリスタルジャマー, Kurisutaru Jamā?) is a weapon in Final Fantasy Type-0, deployed by Militea to disable the enemy's Crystal and render the people who use its blessings powerless. It is operated by the l'Cie of the White Tiger Crystal, and also by regular humans of the Imperial forces.

The crystal jammers use energy extracted from the White Tiger Crystal. Devices known as C-Engines then utilize this energy, generating a field of greater opposing Crystal energy to neutralize the target Crystal's resonant energy and influence, and the target Crystal temporarily loses its light. As long as the device relies upon energy from the White Tiger Crystal, it can only operated for a limited amount of time. Some speculate the need for extra power sources to be the motive behind the empire's attempt to seize all four Crystals of Orience. Intel comes in that the empire is developing a crystal jammer-equipped MA capable of harnessing the energy of any Crystal.

Machina: Severed From Their Crystal's Blessing[]

During the Militesi Assault on Akademeia, the Imperial forces deployed two crystal jammers to suppress the Dominion's magic: one aboard a dreadnought, and another built into a Magitek Armor. Severed from their Crystal's blessing, Rubrum's cadets, legionaries, and l'Cie were left all but powerless.

But when l'Cie Qun'mi stepped out of her MA to engage dominion legionaries hand-to-hand, Class Zero destroyed the jammer aboard the imperial dreadnought, temporarily restoring the use of magic and creating an opportunity for cadets like Machina and Rem to launch a counteroffensive.

Realizing the danger of the situation, Qun'mi quickly returned to her MA and reactivated the second jammer, but it was too late. Class Zero arrived on the scene and made quick work of the device, destroying Qun'mi's MA in the process and foiling the empire's campaign to capture Akademeia.

The Dáinsleif's crystal jammer was a prototype operable only by a l'Cie. After considerable research, however, imperial scientists developed jammer anyone could control, and they mounted the first unit on the Balmung MA. As a test, Milites stationed the Balmung near a stronghold on the empire-dominion border, and the new device proved a terrific success, greatly inhibiting the dominion advance at the Battle of Big Bridge.

The basic principle behind these jammers is the use of energy extracted from the Crystal. Devices known as C-Engines use this energy and generate waves to neutralize the signal of their target Crystal, thereby nullifying the target's effects. In essence, the two Crystals in question vie for supremacy over one another.

However, so long as the device relies upon energy drawn from the White Tiger Crystal, it can only continue causing interference for a limited amount of time. Some speculated this need for extra power sources to be the motive behind the empire's attempt to seize all four Crystals of Orience. Intel regarding the development of a new jammer-equipped MA capable of harnessing the energy of any Crystal lent credence to this theory. This information greatly dismayed Central Command, fearing now that the empire might be able to launch a full-scale assault using the power of three Crystals.

The novels depict the penultimate spiral of Orience before the final spiral as depicted in the game. Qun'mi attacks Akademeia with a crystal jammer and Zhuyu Voghfau Byot, the Vermilion Bird Primus l'Cie, refuses to act leading to Class Zero being deployed to take the jammer out. Qun'mi perishes in her next mission, passing her l'Cie powers onto Brigadier General Qator Bashtar after Machina Kunagiri refuses to become her successor. Three crystal jammers are set around the governmental building Marshal Cid Aulstyne of Milites is using as his final stronghold with Qator as his final line of defense. Class Zero combine their efforts in taking out the crystal jammers and defeating Qator on their way to confront Cid.

The crystal jammer was developed by Cid Aulstyne, being known as an engineering whiz, with help from Secundus l'Cie Qun'mi Tru'e. When the Militesi Empire attacks the Dominion of Rubrum, they deploy two crystal jammers to disable the Vermilion Bird Crystal. The first disables the dominion's crystal-powered shields and renders its legionaries unable to use magic. In face of this threat, Class Zero cadets are tasked with disabling the jammers, as they are immune to its effects due to drawing their power from phantoma rather than from the Vermilion Bird Crystal. Class Zero disables the jammer aboard the dreadnought, and then face off against Qun'mi, the White Tiger Crystal l'Cie who was operating a second crystal jammer from her magitek armor, Dáinsleif. They defeat her, and drive the imperials away from Akademeia. Afterward, the crystal jammer is inoperable for some time.

When the cadets stay at Hotel Armada in the Militesi capital of Ingram during a supposed ceasefire, Machina and Rem—the class members who had not been augmented by Arecia Al-Rashia to use magic without the Crystal—feel their powers fading and identify it as the effect of the crystal jammer. This alerts the cadets to having walked into a trap, and they must fight their way through the streets of Ingram to escape.

The Balmung is developed as a successor to the Dáinsleif after Militesi officials recognize reliance upon a l'Cie's power as a major design flaw and thus rework the crystal jammer to be operated by any soldier. Balmung's jamming field extends further than that of its predecessor, and the empire deploys a number of Balmungs in the battle of Big Bridge, but a dominion task force destroys the fleet. The crystal jammer disabled, the Vermilion Bird Secundus l'Cie Lady Caetuna summons the Verboten Eidolon Alexander, annihilating the Imperial forces and securing victory for Rubrum.

After Tempus Finis crystal jammers are no longer useful, as the light of the Crystals of Orience fades.

Crystal jammer on an imperial dreadnought. 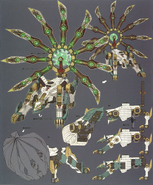