If you trace the root of all life, there exists one source. ...a presence that presides over all life and memories. The crystal...

The Crystal World is the last area in Final Fantasy IX. The final bosses are fought at the end of the road, and the only random encounters are crystalline replicas of the four guardians of Terra.

After traveling through Memoria and viewing their memories and the memories of the planet, the party arrives at the Gate to Space. They reach the Crystal World through an invisible walkway through space called To the Origin. As the Memoria has led them further and further back in time, the black nothingness may represent a time before Gaia existed.

The party travels across a set of roads of pure crystals, eventually reaching Kuja, gazing into the original crystal, the life force of the universe and the origin of all planets. Threatening to destroy the birth of all things, Kuja sends his pet, Deathguise, to obliterate the party, but is defeated. After Deathguise's fall, Kuja attacks the party himself, using the full powers of Trance. Trance Kuja fails to defeat Zidane and his friends by normal means and resorts to casting the most powerful magic, Ultima, defeating the party and unknowingly summoning Necron.

The background music, "Crystal World", is a twisted version of the "Prelude". Instead of the usual major key, Crystal World is set to a minor key.

The Crystal World is the representative arena of Final Fantasy IX where Squall fights the Warrior of Light, and Zidane fights Kuja. Cecil also has a confrontation with Golbez in Crystal World during his storyline.

The stage is dominated by two large connected orange platforms in the arena's center surrounded by pillars of crystal. Pillars and platforms made of orange and purple crystal float in the air and form a network of hexagonal platforms around the bottom of the central platforms. Some platforms of rock cannot be destroyed, but the platforms and crystal can be. In the background the Crystal of Final Fantasy IX can be seen spinning inside a large ring. The Ω version has crystal pillars and platforms appearing in the air in random battles, and the Bravery pool automatically rises each time this occurs. Destroying these features causes them to reappear and raise the Bravery pool faster.

The Star's Core is the battlegen item obtained through stage destruction in this area.

The Crystal World appears as the Battle Music Sequence for "Battle 1", "Battle 2", and "Darkness of Eternity".

The Crystal World returns as the BMS for "Battle 2" and "Darkness of Eternity". 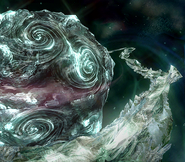 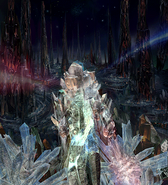 The depths of the Crystal World where Trance Kuja is fought.

Concept art of the Crystal World in Dissidia.

The Crystal of Crystal World as shown in Dissidia.