The Crystal Tower, also known as Syrcus Tower (シルクスの塔, Shirukusu no Tou?), originally fan translated as Sylx Tower, is a location from Final Fantasy III. The wizard Xande has set up base here, since it is here where the imbalance of light and darkness is strongest. It contains a portal to the forbidden land, Eureka.

After obtaining the four fangs, the Warriors of the Light cross the Ancients' Maze and reach the Crystal Tower in order to confront Xande. However, high in the tower is a mirror surrounded by five dragons. Anyone who looks in this mirror will be inflicted with the Curse of the five wyrms, and will be unable to move. To save the Warriors of the Light, the souls of Doga and Unei seek five people of pure hearts who will be able to break the curse, by standing in front of each of the dragons. Cid, Sara, Desch, one of the Fellows, and Alus are summoned into the Crystal Tower, and allow the Warriors to reach the top of the tower and confront Xande.

The Crystal Tower is mentioned as one of the wonders. It bears the following description:

This spire, once the heart of the ancient kingdom of Baron, was protected by the labyrinthine city at its base. The tower's crystal walls were a symbol of the royal family’s wealth and power, but also of oppression.

The Crystal Tower appears as a second arena for Final Fantasy III. It is based on the surroundings of the tower, featuring the walls of the Ancients' Maze that surrounds the tower. The arena is mostly flat, with the tower in the center that players can climb to certain heights, and various platforms ringing the outside. The ground area contains trees which can be destroyed.

During the twelfth cycle, Laguna discovers a wild rose and gives it to Firion, in hopes that it will help him recover his memory more quickly. When Firion leaves, Laguna begins to speak with Squall about all the people they've met, and how Squall shouldn't socially isolate himself from them, as they may not even have the chance to say good-bye.

During the thirteenth cycle, Cecil and Terra speak about what may be waiting for them back home. While Terra worries that she may have nothing to return to, Cecil reassures her that even if she has no one to welcome her back, that she can still make friends when she gets there, like she has in this world.

The Crystal Tower has no Omega version. Xande's Hatred is the battlegen item obtained through stage destruction in this area.

The Crystal Tower appears as an Easter egg in The Floating Continent. After the stage transforms, the fog dissipates revealing the Crystal Tower at the horizon and the Invincible appears ascending from the sea of clouds and starts flying around the stage. 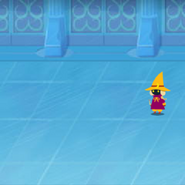 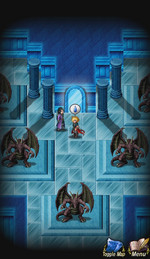 The Crystal Tower appears in Dragon Quest & Final Fantasy in Itadaki Street Portable as a map. The floor displayed is the floor of the five dragon statues.

The Crystal Tower, surrounded by the Ancients' Maze, on the World Map. 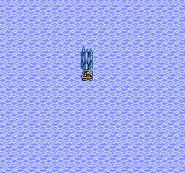 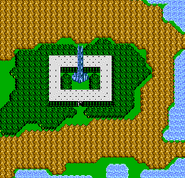