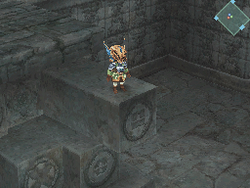 The Crystal Temple is the final dungeon in Final Fantasy Crystal Chronicles: Ring of Fates. Before the events of the Crimson Moon, many people from Rebena Te Ra would pray for the Crystal there. On the final floor players will fight three bosses, and they are Cu Chaspel, Galdes and the last, The Great Galdes.

Every time a boss is defeated, players have a chance to rest and prepare for the next fight. After defeating Galdes, the Crystal Temple becomes the Lunite Temple and is host to several older bosses that the player must fight with each character separately.

Note: Items marked with a * are one-time only.

Switch barriers.
Add a photo to this gallery

This section about a location is empty or needs to be expanded. You can help the Final Fantasy Wiki by expanding it.
Final Fantasy Crystal Chronicles: Ring of Fates
Retrieved from "https://finalfantasy.fandom.com/wiki/Crystal_Temple_(Ring_of_Fates)?oldid=3243392"
Community content is available under CC-BY-SA unless otherwise noted.