(月の民の館, Tsuki no Tami no Yakata?, lit. Mansion of the Moon People)

The Crystal Palace, also known as Lunar's Lair, is a location in Final Fantasy IV and Final Fantasy IV: The After Years. It is where Fusoya guards the Lunarians in their Lunar Sleep and where the eight Lunar Crystals are enshrined. It contains recovery points.

Cecil, Rydia, Rosa, and Edge arrive at the palace and meet Fusoya who explains the truth about Kluya, Zemus, Golbez, and the Crystals. He agrees to accompany them to defeat the Giant of Babil.

Golbez and Fusoya leave the Crystal Palace to inspect the Impact Crater. When they return the Mysterious Girl appears and attacks them with Leviathan. They find the Crystals of the Moon darkened, and the Crystals shatter one by one as the two head into the subterrane to check on the Lunarians. As the final Crystal shatters, Zeromus's Malice is released and attacks them.

Because of the rocky terrain of the Red Moon, it is impossible to land the Lunar Whale directly outside the Crystal Palace. It is required to at least land on the plateau closest to the first of the Lunar Tunnels.

1F is the first room from the entrance, and is where Fusoya—sitting on the crystal dais—is found. Fusoya tells the party about Cecil's origins and about the Giant's impending danger. On the opposite sides of the room, two cure pots (HP and status is on the left, MP is one the right) are available for use.

It is the room after 1F, and is accessible only after the events of the Giant of Babil. 2F holds all of the Red Moon's crystals, and when prompted, inform the player of Zemus. At the center of the room is the teleporter that will warp the party to the Red Moon's core.

The background music that plays inside the Crystal Palace is the "Prelude".

The Crystal Palace appears in the background of the Lunar Subterrane Stage.

The Crystal Palace appears in the background of Subterrane stage, though it is now closer to the forefront.

The Crystal Palace in the map (SNES).

The Crystal Palace in the map (PSP). 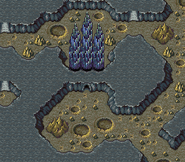 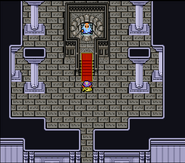 The Crystal Palace on the Moon Map in Final Fantasy IV: The After Years (Wii).