Gloves of crystal, crafted long ago.

Crystal Gloves (クリスタルのこて? or クリスタルの小手, Kurisutaru no Kote?, lit. Crystal Bracer or クリスタルグラブ, Kurisutaru Gurabu?, lit. Crystal Glove), also known as Crystal Glove, Crystal Armlet, Crystal, or Crystal Claws, is a recurring piece of equipment in the series. Originally one of the stronger arm armors in early installments, it has since become an accessory and sometimes even was a weapon.

Crystal Gloves is the strongest gloves providing 10 Defense, 12 Evade, 3 Weight, +3 Intelligence, and immunity to Petrify. It can be found in Whisperwind Cove. It can be equipped only by the Knight and Ninja classes.

Crystal Gloves is a high-ranked gauntlet that can be bought for 50,000 gil at Eureka or found at Ancients' Maze and Crystal Tower. In the NES version, it provides 10 Defense, 10 Magic Defense, 15% Evade. In the 3D remakes, it provides 30 Defense, 15 Magic Defense, +4 Strength and Vitality, and immunity to Confusion, Toad, Mini, Petrify, and Sleep.

Crystal Gloves is the strongest gauntlet that is exclusive to Paladin Cecil, which provides 10 Defense, 7 Magic Defense, -10 Evasion, 4 Magic Evasion, +3 Spirit, and resistance towards attacks from Undead enemies. It can found in Lunar Subterrane. In the 3D remakes, it no longer carries the -10 Evasion penalty.

Crystal Gloves provides 10 Defense, 7 Magic Defense, -10 Evasion, 5% Magic Evasion, +3 Spirit, and is strong against undead attacks. It can be found the Depths, and can be equipped by Cecil, Ceodore, Kain, and Golbez.

Crystal Glove is mid-ranked weapon for Tifa that provides 75 Attack, 115 Atk%, 16 Magic, Critical +2%, and three linked materia slots with normal growth. It can be bought for 16,000 gil at Mideel.

Crystal Armlet is an armor for Kimahri, obtained when the dominant abilities on any armlet are all four elemental Eater abilities.

Crystal Gloves is an accessory that provides +60 Defense, and when one is consumed by a monster, it raises its Defense by 1. It can be found at Bevelle Underground (chapter 3), dropped from Adamantoise, Shiva, Concherer, and Sandy (rare), or as a random prize for winning the Cactuar Cup.

Crystal Claws is a high-ranked claw that provides 90 Attack Power, 20 Hit, and +2 Attack.

The Spiral Claw is the ultimate weapon for Kevin should he take the Light-most path of the Grappler, the Godhand. It is a fist weapon made of purple crystal, with clusters of crystals bundled at its knuckle area and tapers at the tips. It is made of aesthetically delicate but durably composed naturally formed crystal. Though its appearance is odd, the curved and tapered tip is meant for piercing through defenses. It sparkles with every motion the user makes. 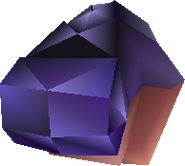 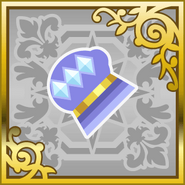 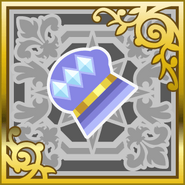