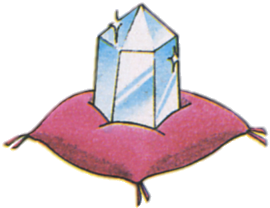 A crystalline sphere. Pretty, and quite useful.

The Crystal Eye (すいしょうのめ / 水晶の目, Suishō no Me?) is a recurring item in the Final Fantasy series.

A transparent orb of crystal.

The Crystal Eye is a transparent orb of crystal owned by the blind witch, Matoya, who used it to see. The Dark Elf, Astos, stole the Eye in his plan to take over Elfheim. It is gained by defeating Astos. Returning it to Matoya will allow her to see again, and she will be able to create a special elixir to revive the sleeping Prince of Elfheim.

The Crystal Eye is owned by Master Matoya, an allusion to the original Final Fantasy's Matoya. An ancient Crystal of Light, it is used to augment someone's senses; Krile Mayer Baldesion uses it several times to follow the aether trails someone leaves behind.

Crystal Eye is a special trade accessory that can only be obtained via Battlegen in a battle against a Friend Card of Warrior of Light, and is used to create the Wyrmhero Blade.

The extracted eye of the first high-speed weapon.

Crystal Eye appears as a special trade accessory that provides +4 Luck when equipped, and can be found in only two sections of the Confessions of the Creator.

The Crystal Eye is referred to as Light Crystal in the episode, and it looks similar to the original Nintendo Power artwork. Astos stole the Light Crystal from the Witch (the character based on Matoya) years ago, and whoever looks through it can see who they really are. This breaks the enchantment put on Captain N and reveals Astos's true form who was disguised as a friar. 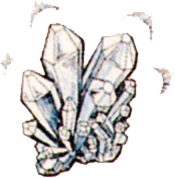