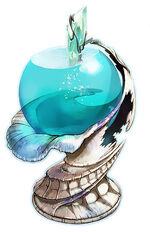 The Crystal Chalice is an item carried around by Caravanners in Final Fantasy Crystal Chronicles.

The Chalice also contains a shard of a crystal to protect the members of the Caravan when traveling through the Miasma. In Multi-player Mode, one player must carry the Chalice around when in a dungeon, and in Single Mode, a moogle named Mog carries it around. Each Miasma Stream has an element which changes each year and can only be passed if the Chalice contains the same element.

There is a special Mystery Element that the player can obtain by completing various tasks in the Lynari Desert. This element will allow the player to pass through any Miasma stream without having to change the chalice to the element of the steam's.

The Crystal Chalice's element will not only allow the Caravan to pass through Miasma streams, but it will also protect the party from various status ailments:

A Crystal Cycle is completed when the Caravan collects one drop of Myrrh from the Myrrh Tree after defeating the boss of that tree's dungeon. The Caravan cannot receive another drop of Myrrh until the Myrrh Tree replenishes itself after two years have passed. The level and its monsters become increasingly difficult with each passing Crystal Cycle.

Certain dungeons of rooms filled with a poisonous gas, much like the Miasma from the original game. The Lilties' urn can be set on certain tiles that create a sphere around it to protect all party members inside the sphere from the gas, much like the Crystal Chalice from the original game. Failure to protect oneself will result in a quick death for the player.

There is a sculpture of a Crystal Chalice in the Alfitaria Royal Library.