The Crumbling House is a location in Final Fantasy VI. It is a house in the town of Tzen.

In the World of Ruin, Celes comes to Tzen from Albrook, following rumors of a man searching for his friends. As she arrives at the town, Kefka attacks Tzen with the Light of Judgment. The mansion on the north end of town begins to collapse, and Celes finds Sabin holding up the structure. Celes races inside the building to find a child trapped in the basement, and the two narrowly escape the home before it crumbles. Sabin joins Celes, the discovery of his survival filling her with hope that the other members of the group are still alive.

The house opens onto an entrance hall with a door leading to a seating room with a stove and fireplace. The lone room on the top floor is a bedroom with two beds. Stairs down to the basement are contained in their own room. The basement is dominated by a large room with stairs up to a raised area with a fireplace, stove, cabinet, and table with chairs. There is also a small side room with a clock and table.

In the Pixel Remaster port, the house exterior has unique graphics that show it in the process of collapsing, with its roof begun to cave in and the lower section of the home leaning on its foundations. After its collapse the house's structure has collapsed to a degree that parts of its interior are visible from the outside.

Downstairs, the chest on the right side of the raised area contains a Magicite Shard, and the chest on the left side is another monster-in-a-box fight against four Nightstalkers. The side room, visible when descending the stairs, has a chest with a Blood Sword.

In the World of Ruin, the first time the player enters Tzen, Kefka attacks the town with his Light of Judgment, causing monsters to infest a manor home and the house to crumble while the child of the owner is still inside. The party finds Sabin holding up the house, and he sends them inside to save the child before the house collapses. The player then has six minutes to get inside, rescue the child, and escape or Sabin will lose his grip and get crushed, resulting in a Game Over.

The easiest way to do this is to stock up on Smoke Bombs in Albrook and use them to immediately escape from enemies. A dozen or so should be sufficient to get through the house. Be sure to buy them before coming to Tzen, as once the town is entered and the event begins, the party cannot leave town. Also equip party members with Relics to resist Petrify, as the Zokka enemies can inflict it and if the player has a party of just Celes, petrification is an instant Game Over. The Tzen Relic shop sells the Jeweled Ring, which will suffice.

Assuming Smoke Bombs to flee from enemies, and that one avoids the two monster-in-a-box encounters (the chest at the top of the stairs, and the chest in the basement on the left side of the balcony), the party has plenty of time to grab all the treasure chests in the house and escape safely. Afterward Sabin rejoins the party.

It is possible to do this quest at the start of the World of Ruin with only Celes, but it can also be skipped until later. 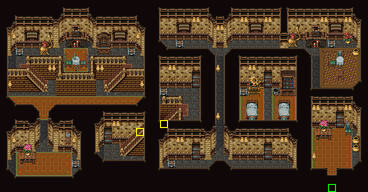 "The Unforgiven" (許されざる者, Yurusarezaru Mono?) plays throughout the collapsing house event in Tzen.

The original idea for the Tzen event in the World of Ruin was to have Sabin die if the player ran out of time while in the crumbling house. Were the player to return to Tzen with Edgar he would wander forlornly in the middle of the night, searching through the rubble in vain. However, the World of Ruin was seen as dark enough and the event was changed.[1] 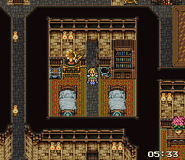 Inside the collapsing house (SNES).

The house is completely collapsed (2014 mobile/Steam).