Citadel in Insomnia (former)
Lestallum
Crownsguard is the military force of the Crown City of Insomnia in Final Fantasy XV. It is a royal guard tasked with the protection of the royal family of Lucis, as well the Citadel. The Crownsguard's focus was changed to the protection of the citizens right before the start of the game.
See also: Kingsglaive, Royal Guard, or Hunters

Members of a defense force that traces its roots back to the Lucian army of old. Unlike the Crown City Police that protect Insomnia or the border patrol that keep the peace in the purlieus, the combat-ready Crownsguard act as a special forces unit tasked with fending off outsiders who have found their way inside the Wall. Clarus Amicitia was serving as captain at the time of Ardyn's initial assault on Insomnia.

Notable Crownsguard members include Clarus Amicitia, King Regis's "shield"; Gladiolus Amicitia, who serves the same role for Prince Noctis; Ignis Scientia, Noctis's royal adviser who identifies himself as a servant of the Crownsguard; the Crownsguard's commander[1], Cor Leonis, a legendary soldier known as the "marshal"; Prompto Argentum, who is admitted in the days before the events of the game; and Monica Elshett and Dustin Ackers who help Iris Amicitia, among other evacuees, escape Insomnia.

The player party's default attires are provided by the Crownsguard, as is Noctis's smartphone. Cor dresses in a similar manner. At one point, Ignis tells Prompto that in the Crownsguard one's attire identifies them, and asks him to wear it with pride. Crownsguard's insignia appears similar to the one used by the Kingsglaive of a Bahamut with fifteen swords ( 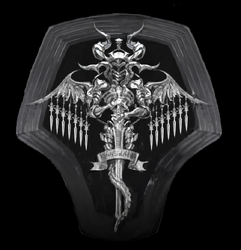 ), as it appears on Gladiolus's vest in the "no jacket" version of his default attire, and on the Crownsguard decal for the Regalia.

The Crownsguard combine their forces with the Royal Group to quell the Adagium's rampage upon the Crown City, but find they are no match against the intruder. The forces are led by Clarus Amicitia who directs their movements without partaking in battle himself.

At the Crownsguard's training hall, Clarus Amicitia tells Gladiolus about the security measures in place during the upcoming signing ceremony of the treaty between Lucis and Niflheim. Marshal Cor Leonis would be on external patrol that day and the Crownsguard will operate as usual. Only the bare minimum will be on duty, as the Citadel will be left to the Kingsglaive, another elite group working for the royal family whose special trait is that they can channel and use the king's magic.

The peace has brought along many changes, including the role of the Crownsguard, whose new place will be with the people rather than the king. Clarus doesn't mind as protecting the populace ensures their support for King Regis, as the Amicitia family has but one duty: to safeguard and support the king. Clarus asks Gladiolus to keep Prince Noctis safe, not just as the next king, but as a comrade and a true friend.

Cor arrives with Prompto who has arrived for his Crownsguard uniform. Prompto is nervous to be meeting Clarus, and affirms he has completed his self-defense training for the journey. Gladiolus and Prompto leave, and the atmosphere becomes solemn. Cor is unhappy the Crownsguard has been excluded from everything related to the signing, and Clarus reminds him that the new orders are for the Crownsguard to protect the people of Lucis, and says that the glaives are the only ones who can fight the empire if something goes wrong.

Regis knows that the treaty-signing is a ruse, and thus is going to send Noctis away from the city. Clarus is the same, and both feel burdened that they have been unable to tell their children the truth of what is to come.

Insomnia falls and the empire steals the Crystal from Lucis. King Regis is killed and imperial magitek forces destroy most of the city. Cor ushers Noctis to his new quest of reclaiming the kingdom by collecting the royal arms of his forebears and forging covenants with the Astrals. Still following his original orders from the late king, Cor concentrates his efforts in helping the people of Lucis. He works with the local hunters and supports Noctis from afar. Gladiolus, Ignis, and Prompto stay by Noctis's side, more as friends than members of the Crownsguard, however.

When Noctis's party meets with Monica Elshett at a prairie outpost, they learn most of the Crownsguard didn't survive Insomnia's invasion. Monica and Dustin had escorted Lady Iris out of the city, and Dustin accompanied her the rest of the way to Lestallum. Monica and Dustin later come to stay at Cape Caem with Iris and Talcott Hester. After darkness overwhelms the world, the remaining members of the Crownsguard, Hunters and Kingsglaive band together to defend the remains of human civilization. Cor becomes the leader of Kingsglaive, while Gladiolus inherits his position as the marshal of the Crownsguard.

Crownsguard soldiers are fought as enemies in Insomnia in Final Fantasy XV: Episode Ardyn. They are men in riot police gear who wield large golden shields. They are easy to defeat and are of no threat to the player, and can be disposed of with a single Daemonify command. After defeating one the player unlocks their entry in the Datalog. They may yield Crownsguard ID badges as spoils, which can be sold for yen.

Crownsguard-themed decal for the Regalia.

Crownsguard emblem on the Genji Blade.