A rod wielded by the female honor guards of a queen.

The Crown Scepter (プリンセスガード, Purinsesu Gādo?, lit. Princess Guard), also known as the Crown Sceptre, Princess Rod and Princess Guard, is a recurring weapon in the Final Fantasy series. It is one of the most powerful rod-type weapons, and as such has stats meant to empower magic users.

The Princess Guard is Aeris's strongest weapon, acquired in the Temple of the Ancients. It has 52 power, 110 hit rate and increases Magic by 22, Vitality by 12, and Spirit by 20. The weapon's physical power multiplies for each KO'd ally in the party besides Aeris, and has three linked pairs of Materia slots, and one lone slot. It is the only ultimate weapon that has Materia growth.

A magicked rod wielded by members of the royal guard.

The Crown Sceptre can be obtained via Rendezvous in The War of the Lions remake. It is one of the most powerful rods, having 5 power, a weapon defense of 20%, and increasing magic by 4.

The Princess Rod is the most powerful rod. It has 35 power, 5 defense and magic resist, increases magic by 2, powers up wind, water and earth-elemental damage, and teaches Illusionists the Star Cross ability.

The Crown Scepter is the most powerful rod. It has 35 power, increases defense, magic resist and evade by 5, magic by 2, makes the wielder immune to water-elemental damage, and teaches the abilities Star Cross to Illusionists and Undo to Time Mages.

The Crown Scepter is a level 67 rod, providing increases ATK by 44, DEF by 1 and HP by 220, and grants a further damage boost of 15% to the wielder's magic attacks. It can be obtained from the shop by trading 20160 gil, Flame Rod, Opal x3, and a Purple Gem.

This scepter will always carry with it the spirit of a certain cheerful young lady.

Princess Guard grants +10 to Attack. It can be equipped by Black Mage, Magus, Time Mage, Summoner, Aerith, and Shantotto.

A staff from another world. It belonged to a young woman thought to be the last remaining ancestor of a race known as the Ancients. In its original world, this staff was said to increase the attack power of its wielder if their allies fell in battle, but it does not seem to bear such properties here.

Princess Guard (FFVII) is a Staff that is obtained during the Final Fantasy VII exploration event, To the Forgotten Capital. It provides 22 ATK, 26 MAG, 94 SPR, and HP +10%.

A rod to guard a princess.

The Princess Guard appears as a 2-handed rod within the Forsaken Dungeon. It provides 93 Weapon Atk, 9 Durability, +12 Defense, +5 Magic Atk, +7 Magic Def, -3 Speed, and -3 Consumption Rate. Only Clair Andrews can equip this weapon.

Princess Guard is a staff that can be equipped by Yui. 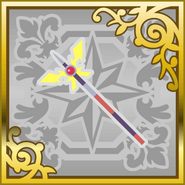 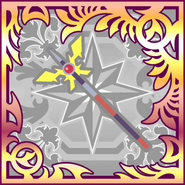 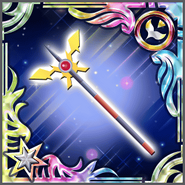