Crowe grew up an orphan on the outskirts of Lucis. Her rare gift for magic earned her a place in the Kingsglaive. Her fellow soldiers are the only family she knows.

Crowe Altius is a character in Kingsglaive: Final Fantasy XV. She is an orphan from the Lucian outlands who now works in the Crown City of Insomnia as a soldier in the Kingsglaive, a special magic-using guard under employ by the crown.

Crowe is a young woman with long brown hair loosely tied up in a bun and brown eyes. She wears the female "mage" variation of the Kingsglaive uniform: a black leather jacket, a form-hugging sleeveless bodysuit with a zipper running down the torso and an intersecting chain in between her collarbone joined by a red gemstone, black pants, and thigh high black boots. The belt around her waist holds her dagger. She wears fingerless red leather gloves and arm warmers, as well as a cape with a red interior.

Crowe's plainclothes are a brown jacket with a camo print on the shoulders. She dons a green top underneath, dark blue jeans, an orange belt, black boots, fingerless gloves and has a storage pack fastened to her right thigh. She has a Li'l Malbuddy charm on her smartphone.

All that fighting we did…all for nothing.

Crowe, as she watches a news report on the ceasefire declared between Lucis and Niflheim

Crowe is a loyal member of the Kingsglaive who cares deeply for her fellow soldiers. She sees them as her family, although she grows tired of hearing Libertus Ostium say she is like a little sister to him.

Crowe is a gifted magic user. With the help of her fellow Glaives, she can summon fiery tornadoes to combat her enemies.

What a life, huh? She was brought up an orphan, run out of her village. I still remember the first time I saw her: scrawny little thing, all covered in dirt, not a friend in the world…But those eyes. Damn. There was something about those eyes. She deserved better.

Crowe grew up an orphan on the outskirts of Lucis. She was forced out of her village by Niflheim and allowed to join the Kingsglaive when she showed skill with magic.

Alongside her fellow Glaives, Crowe fights the combined forces of Niflheim and Tenebrae on the outlands of Lucis. She teams up with some of her comrades to summon a fiery tornado, and when the enemy unexpectedly retreats, she returns to Insomnia. The next evening, Crowe rendezvouses with Nyx Ulric, Libertus Ostium, Luche Lazarus, and Pelna Khara for a drink.

The following day, Crowe learns a ceasefire has been declared between Lucis and Niflheim. She is sent by Titus Drautos, the captain of the Kingsglaive, on a classified mission to escort Princess Lunafreya out of Tenebrae. Crowe has a gift for her, a hairpin traced with Crowe's watch. Just outside of Insomnia, Crowe is killed by an unseen assailant in a van. A pair of homeless men find her corpse. Nyx and Libertus mourn her death, and the latter bitterly defects from the Glaive, blaming Lucis for the tragedy. Drautos passes on Crowe's effects to Nyx, the hairpin and watch among them, which later allow Nyx to locate Lunafreya.

During the fall of Insomnia, Crowe's murderer is revealed to be none other than Luche.

The likeness of Andrea Tivadar is used to portray Crowe. Tivadar also serves as the character's motion capture artist.

In the Japanese version of Kingsglaive: Final Fantasy XV, Crowe is voiced by Ayumi Fujimura. In the film's English version, she is voiced by Alexa Kahn.

Crowe is a character and summonable vision whose job is listed as Kingsglaive. Her Trust Master reward is the Thirst for Survival special ability.

A full-body, CG render of Crowe. 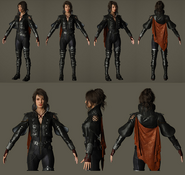 Character model with hood and mask.

Character model without the cape.

Smartphone with a Li'l Malbuddy charm. 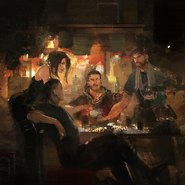 Concept art of Crowe, Nyx and Libertus at a bar.

[view · edit · purge]Altius is the neuter singular form of the term altior, which means "higher" or "deeper" in Latin.