Final Fantasy Wiki
Register
Don't have an account?
Sign In
Advertisement
in: Characters in Chocobo Racing, Characters in the Chocobo series, Black Mages, Chocobo to Mahou no Ehon: Majo to Shoujo to Go-nin no Yuusha Characters
English

Croma (クロマ, Kuroma?), also known as Black Magician, is a recurring character in the Chocobo game series. While Croma appears as a male character in most appearances, Final Fantasy Fables: Chocobo's Dungeon includes Croma as a female character instead.

Known as Black Magician, he is a silent magician who has a castle in Cursed Forest called Black Manor, although it is revealed he does indeed talk in Chapter 9 of the Story Mode when he talks about the gate opening to Fantasia. His racing skills are, on average, better than White Mage's. However, his cornering is tougher compared to White Mage's and he has poor acceleration as well. He can fly over ice sheets.

His vehicle is the MagiCloud MK-I. His ability is Magic Plus, which upgrades the power of the magic stones he owns. The stone powered up is the last one he picked up. His theme is a remixed version of the theme of the town of Mysidia.

Black Magician appears as various types of enemies in the dungeons, but a group of them reside as researchers in the village. Helping them out allows Chocobo the use of their stove and Dispel Tonics for a small fee. The head mage may also give Chocobo a choice of feathers that he could use on his journeys. Later on, a "bestiary" statue hall can be accessed through the basement of the research facility to see the enemies Chocobo has defeated. 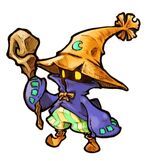 Croma is a bookworm and likes to travel the world, collecting books for his book mobile.

Nothing is revealed about Croma's past, he is just a bookworm who likes to collect books. It was his love of books that released Bebuzzu though, since he was the one who recovered his tome. After Chocobo removed the seal, Croma was spared the same fate as the chocobos, along with Shirma.

Generally, Croma likes to rush into all situations without thinking. It was this kind of attitude that got him petrified in the forest. However, he provides valuable help for Chocobo at times.

It is later revealed that Croma is the descendant of one of the legendary Warriors of Light, which is why he was not absorbed by Bebuzzu.

Once Bebuzzu is defeated and sealed away again, Croma goes back to collecting the books. Upon returning to the island, Chocobo attacks Croma for returning with yet another mysterious tome. 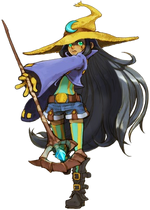 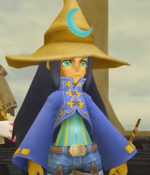 Croma Magnolie is a mysterious figure who was originally the Oracle of Darkness until the Destroyer began his rampage. Weakened, Croma encouraged her sister, Shirma, to aid the other Oracles in summoning the Guardian Beasts in order to seal the town's memories, and thus, the Destroyer. This resulted in the creation of the Bell of Oblivion and the barrier keeping Lostime hidden from the outside world, as well as the loss of all of Croma's memories other than to destroy the one who would disrupt this fragile peace.

As Chocobo attempts to restore the memories of the people in Lostime, Croma warns Chocobo not to meddle, but once she loses to him at the Temple of Light, Croma regains her memories and attempts to kill Raffaello as the evil within him surfaces, only to be sucked into his sword after taking a mortal blow meant for her sister. However, thanks to Raffaello's attempt to regain control of himself, Croma survived long enough for Chocobo to defeat the Destroyer and free her and Raffaello from his grasp. Reunited with her sister, Croma thanks Chocobo for opening her eyes to the truth.

A book found in the empty house after the ending reveals that she and her sister are the daughters of two of the nine former heroes who died against the Destroyer: Elena, the White Mage and Nero, the Black Mage.

Croma is the main character in Cid's second Alvancia picture book "The Lonely Stuffed Toy". He is a stuffed toy living with his friends in his creator's, Nero, castle. At the beginning of the story, though, Nero and a majority of Croma's friends are missing.

In the event stage for the original Final Fantasy, the party shown in the battle scenes includes a Black Mage named "Kuroma". 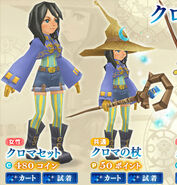 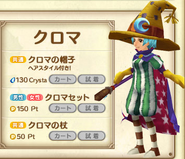 Croma from Majo to Shoujo to Go-nin no Yuusha.

Croma is voiced by Lizzie Freeman in Chocobo's Mystery Dungeon Every Buddy! remaster.

Croma is a shortened form of Kuro Madoushi, "Black Mage" in Japanese.