Hop into the current, and you'd be swept straight to Nikeah! Too bad out only diving helmet was stolen...

The Crescent Mountain Cave, also called Crescent Mountain, is a location in Final Fantasy VI. It only appears in the World of Balance on the Veldt, and serves as the entrance to the Serpent Trench. There are no enemy encounters within this area.

Gau along with Sabin and Cyan head into the Crescent Mountain Cave to the south in search for Gau's "shiny, shiny treasure" he has been keeping within the mountain. Gau forgot where he put it, and they search the vicinity for it. He eventually finds the "shiny thing" which happens to be the stolen diving helmet from Mobliz, and the three hop into the current of the Serpent Trench.

In the World of Ruin, Crescent Mountain and its associated cave are seemingly gone, though another mountain range with the Cave on the Veldt exists in its place.

The only item to find here is a Potion, found by going to the cliff to the left side of the entrance when searching for the diving helmet; this triggers a scene where Gau finds the Potion.

When the party first brings Gau to Crescent Mountain, it triggers a search for the diving helmet. Optional scenes can be triggered by approaching the upper-right of the entrance area, the ledge to the left, and a higher-up ledge at the top of the cave. The second event causes the party to find a Potion, the third causes the party to lose 500 gil if they have that much (if they have under 500, they lose nothing).

The diving helmet is found when the player approaches the exit of the cave with a large open ledge in front of it. At this time the party automatically enters the Serpent Trench.

In the Pixel Remaster port, the spots where the player can trigger these events are marked by mounds of dirt on the ground.

Diving into the Serpent Trench and fighting a battle there is one of the ways Mog can learn the Water Harmony Dance, which is otherwise only learnable on the Lethe River and in the fight with Leviathan in the GBA release and re-releases based on it.

The easiest way to do this is to land the airship near Nikeah and rent a chocobo, and ride it all the way east and south through the Doma region to Baren Falls, leap down the falls to the Veldt, and then jump in the Serpent Trench. The party will wash up in Nikeah near the airship. 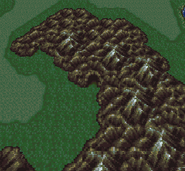 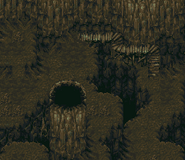 Crescent Mountain on the World of Balance map (2014 mobile/Steam).

The name refers to the shape of the mountain range. [view · edit · purge]In art and symbolism, a crescent is the shape produced when a circular disk has a segment of another circle removed from its edge so that what remains is a shape enclosed by two circular arcs of different diameters which intersect at two points (usually in such a manner that the enclosed shape does not include the center of the original circle). In astronomy, a crescent is the shape of the lit side of a spherical body (most notably the Moon) that appears to be less than half illuminated by the Sun as seen by the viewer.