Crescent Lake is a town from the original Final Fantasy. It is located on the southeastern island in the archipelago where the game takes place and is in on the shore of a lake that is shaped like a crescent. The Circle of Sages is located here.

After Lich is defeated in the Cavern of Earth, the Warriors of Light must travel to Crescent Lake to track down the next Fiend, Marilith of Fire. They learn from the Circle of Sages the Fiend lies to the west, making her lair in fiery Mount Gulg. They obtain a canoe from one of the sages and sail up Crescent Lake's feeding river to reach the volcano.

The background music that plays in Crescent Lake is Final Fantasy's "Town" theme. 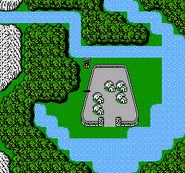 Crescent Lake and its namesake gateway in World B in Dissidia 012 Final Fantasy.

The location name refers to the shape of the lake. [view · edit · purge]In art and symbolism, a crescent is the shape produced when a circular disk has a segment of another circle removed from its edge so that what remains is a shape enclosed by two circular arcs of different diameters which intersect at two points (usually in such a manner that the enclosed shape does not include the center of the original circle). In astronomy, a crescent is the shape of the lit side of a spherical body (most notably the Moon) that appears to be less than half illuminated by the Sun as seen by the viewer.