Crawler is a boss in Final Fantasy X fought at Lake Macalania. It is the third and final Al Bhed weapon used in an attempt to kidnap Yuna and is piloted by Brother.

Crawler is accompanied by a Negator, which blocks the use of magic and aeons. It will attack with its Gatling Gun that hits random party members eight times for moderate damage.

Destroying the Negator is easy, although it can be a double-edged sword: when it is gone, Lulu is free to use her Thunder spells, and Yuna can summon Ixion, but Crawler will now charge its Mana Beam, a devastating attack on the entire party used after three turns of charging. The attack can be negated by another Negator being deployed, which occurs after Crawler is struck by four magical attacks. Since Lulu's Fury counts as "special" damage rather than magical damage, it won't be factored in.

If a new Negator is launched, Crawler continues the current Mana Beam countdown and only returns to using Gatling Gun the turn after using Mana Beam fails. When no Negator is present, Crawler has a 50% chance of countering anything with Assault. However, if the attack is Lightning-elemental, it will always counter. If an attack triggers both Assault and a new Negator, Assault isn't used; only the Negator is deployed.

If the player times the summoning of an aeon before a Negator is deployed, it can stop Crawler from using Mana Beam and the party can have the aeon out for the fight, making it somewhat easier.

Tidus's abilities are useful. Slow and Delay Attack are effective; and Cheer and Haste for the party. Rikku's Mighty Guard Overdrives can be also helpful.

To fight the boss without using magic, Rikku can use Lightning Marbles and Electro Marbles from the fiends in the Thunder Plains. The marbles deal around 1,000 or 700 damage, so the party can finish the Crawler off without killing the Negator. 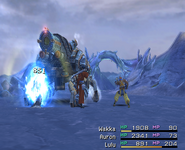 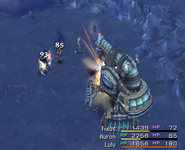 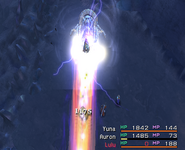 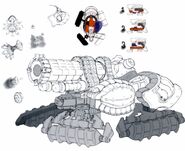 Concept Art of Crawler and Negator.
Add a photo to this gallery

Retrieved from "https://finalfantasy.fandom.com/wiki/Crawler_(Final_Fantasy_X)?oldid=3380785"
Community content is available under CC-BY-SA unless otherwise noted.