Crawler (クロウラー, Kurōrā?), also known as Crawl, is a recurring enemy species in the Final Fantasy series. They usually resemble either large centipedes or millipedes, varying by game. Where they are not a species of their own, they are often grouped together with arthropods or worms. They often inflict a negative status effect on targets, with attacks or special abilities, though the status effect inflicted varies wildly between games. They are usually considered to be among the lower echelon of enemies in terms of difficulty to defeat.

The Crawler, in its original appearance, is found in the Marsh Cave. While it attacks are not very powerful, it can inflict Paralysis on its targets with them.

The Hornworm, called Crawler in the SNES, PlayStation and Game Boy Advance releases of Final Fantasy IV, resembles a millipede more than a centipede. It is found on the Underworld map, and has no notable attacks or abilities, as well as few status resistances, and can be easily dispatched by the party.

In Final Fantasy VI, Crawlers are found on islands in the World of Ruin. They are similar in appearance to the crawlers of the original Final Fantasy. Attacking in groups of three to four, they can use the ability Feeler to poison targets, and when only one crawler remains, it can use Dischord to halve the level of a character.

Crawlers in Final Fantasy VII are unique among crawlers, possessing no legs and resembling snakes more than centipedes. It may use Bite or its Cold Breath attack, but it is not a powerful foe, relying more on numbers or powerful allies such as the Ark Dragon than physical force. A group of them can be defeated easily with Matra Magic.

Crawlers in Final Fantasy IX are strange foes, resembling a bizarre cross between a centipede, scorpion and worm. They can be found in Cleyra and Gargan Roo, and give an unusually large amount of experience points for the area they are found in. They can attack with their stomachs or claws, and may also use Drain.

The machina enemy Crawler (called "Al Bhed Gunner" in Japanese) in Final Fantasy X is an entirely separate enemy. It is a boss encountered at Lake Macalania, attempting to kidnap Yuna. It uses a Negator to negate magical attacks and attacks with a gatling gun and beams of energy, altering its attack patterns depending on if the Negator is active or not. 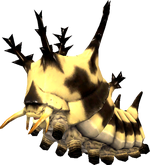 The Crawler is a species of enemies in Final Fantasy XI. Resembling the crawlers of the original Final Fantasy, they also possess the ability to make silk, using it in order to slow enemies or create cocoons. They are found throughout the Mindartia continent, as well as in the Crawlers' Nest and the surrounding Rolanberry Fields in the Derfland region. Subspecies referred to as the Defoliators and the Eruca live in the Aht Urhgan region, and both are highly territorial and aggressive.

Crawlers in Final Fantasy XIII are members of the Nudibranch family, resembling reddish slugs. They are not powerful and do not have any special abilities, and can be defeated without trouble.

Crawlers in Final Fantasy XIII-2 are found in Yaschas Massif -100 AF-, with other Crawlers or with Clematises. They become Commandos when tamed.

Crawlers are the basis of a family of enemies based on the same family from Final Fantasy XI, complete with the Eruca subspecies. They were introduced in Final Fantasy XIV: Heavensward. Crawlers themselves can be found in the Answering Quarter of the Dravanian Hinterlands.

The Crawler is an enemy and also a possible monster that the party's monster unit(s) can transform into. It can be found on the twelfth floor of the Tower.

The Live Oak enemy is called a Crawler in the Japanese version. Notably, this enemy is a plant rather than an arthropod.

Want to hear the most annoying sound in the world? Listen to a crawler's Dischord.

The Crawler appears in Final Fantasy All the Bravest as an enemy encountered on the South Figaro Sea. It uses Slap and drops the Beastkiller. The Crawler's profile references a joke from the film Dumb and Dumber.