We've got a lot of cadets here at Akademeia, so they need plenty of us moogles to watch over the classes, kupo. Some people say Class First's moogle is the best, but that's a bold-faced lie, kupo. The class numbers aren't some kind of ranking—it's all just a coincidence, kupo!

The Cranberry Knights is a group of thirteen moogles in Final Fantasy Type-0 and Final Fantasy Agito. Each is assigned to one of the thirteen classes of the Akademeia, representing each class's characteristics and dressing accordingly. The pronouns "ze" and "hir" are used when referring to them in the Rubicus, and the moogles' genders are never specified.

The group of moogles is called "Cranberry Knights" in the Final Fantasy Type-0 Ultimania guide book, but not named in-game.[1] The moogles are shown with weapons in their concept arts, but don't have them in the game.

Officially known as the Military Operation Organization/Guidance Logistics Expert (or "MOOGLE"), ze provided crucial support for Class Zero during the liberation of Akademeia. One of the youngest moogles at the school, ze did not belong to a particular group of cadets until Class Zero showed up, at which point the administration selected hir for the job.

Mog is the moogle of Class Zero. Although hir full name is "Hatzkhaminei Lowtoyosna Eripulci", Cinque nicknames hir "Moglin", while ze is formally addressed by staff members as "Moogle". Mog wears the Akademeia uniform, with a red cape to represent Class Zero.

Mog's role is to relay orders to Class Zero when they are carrying out missions. During free time, Mog is in Class Zero's classroom, and the player can talk to hir to take classes for increasing stats.

Ze takes pride in hir position as assistant to Class First, long regarded as the strongest cadets in the dominion. Ever since Class Zero came along and upstaged hir kids, however, ze has come to view the crimson-caped cadets as rivals. This moogle expects the most out of hirself and others, but ze also bears great respect for anyone who puts forth a solid effort. Ze will even reward Class Zero in accordance with the amount of time they have spent exploring Orience.

Class First Moogle: A moogle with blue armor and sword who represents the Knight class. Ze is found at the Fountain Plaza and will give the player a reward depending on the number of hours in the player's Play Time.

The First Class Moogle dislikes Class Zero for taking the premier spot away from Class First.

Highly confident in hirself and hir Class Second cadets, ze can come off as somewhat overbearing, often offering hir sound advice without being asked. However, ze has also enjoyed great success on the battlefield, so hir words of wisdom—welcome or otherwise—come from a place of considerable experience.

Class Second Moogle: A moogle that represents the Dragoon class. Ze is found at Central Command and begrudges Class Zero for having stolen Machina away from Class Second, calling the class derogatory names like "Class Zilch" or "Class Nada". Nevertheless, ze hopes Machina will do well in his new class.

Detached and honestly quite depressing, ze is a moogle of few words. Ze is rather shy, rarely speaking unless spoken to, Once you get to know hir, however, ze will transform into an ever-flowing fountain of sarcasm and negativity. Still, hir persistent pessimism is just part of hir charm.

Class Third Moogle: The moogle that represents the Red Mage class. Ze wears a big red hat and has black skin and is found at the Terrace. Ze is the most pessimistic and skeptical of the class moogles, believing there is not much they can do the survive the war, and not taking what the Consortium of Eight tells the populace for face value, saying "some of us aren't so easily fooled, kupo."

Compassionate and kind-hearted, hir pleasant personality is quite befitting of the moogle in charge of Akademeia's healing class. Ze cares deeply about the well-being of all cadets regardless of class or assignment, occasionally working hirself into a state of worried anxiety. Ze also tends to believe anything ze hears, and said gullibility leads hir to a little too trusting.

Class Fourth Moogle: The moogle that represents the Geomancer class. Ze wears a red hat and scarf, and wields a white staff. Ze is found at the Airship Landing Bay. As a Class Fourth supervisor, the moogle explains ze is qualified to provide psychological care.

'Love! Friendship! Hard work! Justice! And your bros!' According to hir, those five things are all one needs to succeed in life. Ze is a passionate moogle, encouraging hir Class Fifth cadets and all others to do their best and strive for greatness. Less impassioned cadets, however, are quick to dismiss hir sermons, countering with detached derision.

Class Fifth Moogle: The moogle that represents the Monk class. Ze is found at the Entrance and believes strongly in team work, marveling how Class Zero cadets don't seem that close.

A bit of an airhead, this moogle always seems to have hir head in the clouds. Ze speaks hir mind with no filter, unaware of social taboos and faux pas. Ze also has a bit of an inferiority complex, harboring one-sided feelings of rivalry toward the more celebrated black mages in Class Third—in particular toward the class moogle.

Class Sixth Moogle: The moogle that represents the Time Mage class. Ze wears a large green hat and wields a green rod with a gear atop of it. Ze is found at the Main Gate.

The chivalrous moogle has taken upon hirself the admirable task of collecting Knowing Tags once belonging to those who fell in battle. Ze fancies hirself a noble soul, even going out of hir way to reward any cadet who retrieves IDs from the field and returns them to hir.

Class Eighth Moogle: A moogle that represents the Thief class. Ze is found at the Entrance. Cadets can exchange Knowing Tags in return for items. The higher the number of tags given, the rarer the item.

Much like the (allegedly) good-for-nothing losers ze oversees, this moogle is nothing but a fun-loving fool—or, at least, so ze would like others to believe. In actuality, however, ze is composed and cautious, and hir cadets are agents from Dominion Intel's Section Four. Given the nature of Class Ninth's secret missions, this moogle has a great deal of empathy with the Class Zero cadets.

Class Ninth Moogle: A moogle that represents the Ninja class. Ze wears a golden eye patch. Ze is found in the Crystarium.

Convinced of hir scholastic superiority, this moogle fancies hirself quite the intellectual. In spite of hir elitist attitude, however, hir comments occasionally miss the mark. Of course, ze bears no ill will: in fact, ze has every intention of assisting others with hir advice. The condescending tone is purely coincidental.

Class Tenth Moogle: A moogle that represents the Scholar class. Ze wears a pair of glasses and is found at the Airship Landing Bay.

The true intellectual among the moogles at Akademeia, ze is devoted to hir research. Ze would even go so far as to pawn hir pom-pom for the sake of science. A quick thinker, e has a lot on hir mind and is more than willing to share those thoughts with whomever will listen.

Class Eleventh Moogle: A moogle that represents the Machinist class. Ze wears glasses and holds a book and is found at the Armory.

Charged with controlling a class of unfettered free spirits, this moogle has nearly reached hir wit's end. The Class Twelfth cadets' lack of cooperation has driven hir to neurosis. More than anything, ze hopes to find a way for hir cadets to utilize their talents and make a positive contribution to society. Unfortunately for hir, however, the kids have nary a concern for dominion society seeing as they are all doing quite well in their own little worlds.

Class Twelfth Moogle: A moogle that represents the Blue Mage class. Ze is found in the Ready Room. Ze worries over hir cadets not fitting in with the rest, but is determined to do hir best for them.

The Cranberry Knights appear with cards of different elements.

In World of Final Fantasy, completing the Intervention Quest, "A Duo of Three", earns the achievement/trophy, "The Cranberry Knights". 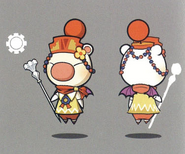 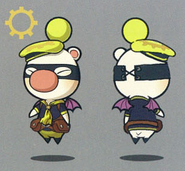 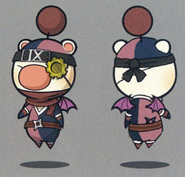 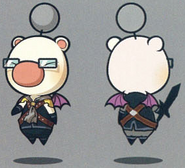 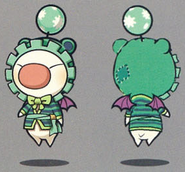 The Cranberry Knights are most likely a pun on Onion Knights, a recurring job.