A large sentry weapon manufactured by Shinra's Advanced Weaponry Division. It is an outdated model used during the last war, so it is kept in storage in the corkscrew tunnel. Slow but heavily armored and bristling with powerful weapons.

Crab Warden is a boss in Final Fantasy VII Remake encountered in the Corkscrew Tunnel at the end of Chapter 5, during "Secret Passageway".

The battle is fought with Cloud, Tifa and Barret. The Crab Warden is durable and attacks with machine guns and by stomping its legs. It is weak to

In the first phase, the party must target its legs. When the machine focuses on one character, a red target reticule will appear over them. Attacking the machine's legs will pressure it.

After it sustains enough damage, the Crab Warden enters the next phase of battle and occasionally summon Slug-Rays. In the third phase, the legs are no longer vulnerable, but its auxiliary weapons are targetable, and it can fire a missile barrage, and will occasionally cause a lightning surge that will be deadly to characters standing on the tracks. It can also focus down one character with attacks, at which point, the player can switch to another to continue dealing damage. Once the pilot is crippled, the boss's weak spot is exposed.

Whoever the Crab Warden focuses on with the red reticule should keep distance and guard, or hide behind one of the containers in the stage. The player can simply change character to focus on the Crab Warden's legs. To damage it, the player can keep Barret at a distance and shoot at a leg, while Tifa and Cloud attack the legs once they are stationary, either with Unbridled Strength martial techniques, or Cloud's Punisher Mode, respectively, to destroy one and stagger it. The party can also use lightning magic and Cloud's Triple Slash. After it is staggered, Tifa should use an Unbridled Strength martial technique to increase the damage it receives, and target the generator.

When the Crab Warden summons Slug-Rays, Barret can deal with them with ranged attacks while Cloud and Tifa focus on the legs. The party can summon Ifrit when available. In the third battle phase, Crab Warden uses a lightning surge attack that electrifies the tracks, but the player can switch to Barret to attack through this or cripple one of the Auxiliary Weapons to interrupt it mid-casting. Standing away from the electrified tracks helps avoid damage if the explosion does go off. The player should dodge the missiles and heal often, and focus on its right and left auxiliary weaponry. When the pilot is exposed, the player should focus on it. Once the pilot is crippled, the weak spot is exposed for Cloud and Tifa to attack it.

Crab Warden is more durable and more deadly. Barret can use Lifesaver and the

Magnify Materia protects the whole party with one casting.

Time Materia can be used to cast

Haste. Tifa's Focused Strike and Starshower allow her to damage the Warden while being mostly invulnerable herself, and Cloud's MP pool allows him to cast

Thundaga often, especially if paired with

Lightning Materia can alternatively be paired with Magnify to hit all targets on the boss at once, and to destroy all Slug-Rays in one go with a

Thundara when the boss calls them down. After Cloud helps stagger the boss with lightning magic, Tifa can come in and raise the stagger gauge with Rise and Fall.

Cloud can be equipped for high magic damage with

Fire Materia in someone's armor allows them to withstand the boss's

Fire attacks better, and even be healed by them if the materia is mastered. The player may need to block more against the Warden's hail of bullets, so

Steadfast Block Materia may also come to use.

The theme for the battle is called "Crab Warden" on the Final Fantasy VII Remake Original Soundtrack. 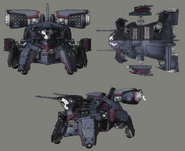