Detects by Sound
List of Crab Enemies
Crabs are small, water-loving monsters of Vana'diel in Final Fantasy XI. They are common creatures, and many adventurers become very familiar with their image quite quickly. Although crabs can come in a variety of shapes and strengths, they all share a few traits; most notably, their shells provide a bit of defense (which they can boost through various means), and their strong pincers can cause more than just a few bruises and cuts, especially against adventurers who don't keep their wits about them.

Crabs are sometimes hunted for their meat, which can be cooked into a number of delicious dishes, and their shells, which are durable and yet fairly easy to work with. 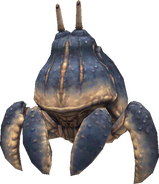 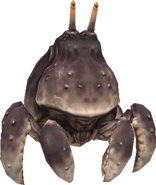 Palette swap of the crab.

A different type of crab. 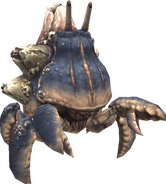 A different type of crab. 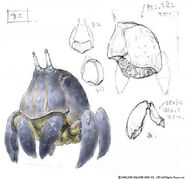 A crab in Buburimu Peninsula.
Add a photo to this gallery
Final Fantasy XI enemies
Retrieved from "https://finalfantasy.fandom.com/wiki/Crab_(Final_Fantasy_XI)?oldid=3212197"
Community content is available under CC-BY-SA unless otherwise noted.