Cover (かばう, Kabau?), also called Guard, is a recurring ability in the Final Fantasy series. It allows a character to take physical damage in the place of an ally. It is usually associated with the Paladin or Knight classes.

The Cover ability is available for the Knight class. The Knight will automatically take physical attacks for any allies in HP Critical status.

Cover is used by Cecil as a command ability once he becomes a Paladin. Cover has a Charge Time of 0. He can use it to take damage in the place of an ally of his choice. He automatically covers any characters who are low on HP.

Cease Cover removes the Cover status and places Cecil into Defend until his next turn comes up. Cease Cover has a Charge Time of 0.

Due to a glitch, in the WonderSwan Color port, Cecil covers allies even as a Dark Knight.

Cover and Cease Cover are Cecil's exclusive abilities. Cover allows Cecil to take damage in the place of an ally of his choice. He automatically covers any characters who are low on HP.

Take damage in place of an ally.

Cover is an ability used by Cecil. It has a Charge Time of 0. Cecil blocks physical attacks on allies and automatically covers allies in critical status. He does not use Cover when he himself is in critical health.

Yang has a variation on the move called Cover Counter. He covers an ally, and after taking a hit, counterattacks the enemy. Cover Counter has a Charge Time of 0.

Cease Cover removes the Cover status and places Cecil and/or Yang into Defend until their next turn comes up. Cease Cover has a Charge Time of 0.

Cover is the Level 1 ability for the Knight class, learned for 10 ABP. It covers characters who are low on HP. Cover can be useful when combined with the Guard command, which makes the Knight immune to physical damage.

Cover is enabled by equipping the Knight's Code relic, which allows characters to cover allies who are in Critical status. The effect will not activate if the wearer is under the petrify, invisible, zombie, sleep, confuse, stop, frozen, chanting, or hidden status, or if the critical character is under the invisible status.

The relic is found in the Returner Hideout. If multiple characters equip a Knight's Code, all attempt to cover for an attacked ally, and one of them will be selected at random to take the damage.

There is also an enemy attack called Overture that forces an opponent to Cover for the caster when attacked physically.

The Cover Materia makes a character shield other allies from single-target physical attacks. For each level, Cover gets a boost of +20%, to a maximum of 100%, and will cover all physical attacks, including several items, such as Elixir and Grenade. The character covers allies regardless of anyone's HP, unlike in previous installments. Cover is found in the garden outside Aeris's house in Midgar Sector 5 Slums. Cover can also be bought for 1,000 gil in Wall Market after the fall of Sector 7.

Receives attack in place of a party member.

Cover is taught by the Guardian Force Brothers for 100 AP. Damage is halved when covering, but the character equipped with it must be one space away from a party member to use it. Cover does not work for multi-target attacks. If a party member is attacked by a physical attack that would otherwise kill them, the character with Cover will take the damage instead. Cover works in conjunction with Defend and Counter, so it is good to use this particular setup on the character in the middle of the party formation.

Protect Girls is a similar ability, which allows Zidane to cover a female party member when their HP is 50% or below. It can be learned by Zidane (35 AP) through the Butterfly Sword and Leather Shirt. Protect Girls covers Dagger, Freya, Eiko, and Beatrix.

Guard is a Special ability appearing in Auron's section of the standard Sphere Grid. When a character uses Guard they will intercept physical attacks on the party, regardless of the health status of their allies. The ability remains in effect until the character's next turn.

The improved version, Sentinel, has a similar effect, except the character will also take a defensive stance and damage from all physical attacks will be halved.

If Tidus uses Guard or Sentinel to shield a party member, the player earns affection points toward the person whom they guarded.

Cover is a job ability available to Paladins upon reaching level 35. Cover relies upon the character wishing to be covered to physically position themselves behind the Paladin for it to be effective. Cover does not negate damage, but allows the Paladin to take damage in place of the intended target for 15 seconds.

This is usually used when a particular party member has gained a great deal of unwanted enmity, though the use of this ability does not actually shift enmity. The effect of Cover can be increased if the Paladin is wearing certain pieces of equipment (ie: Gallant Coronet or Valor Surcoat) and Cover also enhances the effect of some equipment, such as the sword Save the Queen. Cover may be used once every three minutes.

Cover is used by Basch and allows him to take damage for his allies. He learns the ability at Level 45. If he has the Hero's Monograph support, damage will be greatly reduced when covering. His Grand Helm accessory improves it.

Cover is an ability available to Paladins upon completing their Level 40 job quest "Power Struggles". For 12 seconds and the cost of 50 Oath Guage, all damage inflicted upon the targeted party member is redirected to the Paladin, as long as the Paladin remains within 10 yalms of the party member.

Prior to 5.0, in PvP, Cover takes 100% of the damage and reduces the Oath Gauge periodically by 20 while Cover is active. The action Uncover removes the cover status.

Unit takes damage for target until next action.

Cover is a job ability available to Paladins who choose a unit within range to Cover. If that unit is attacked, the Paladin temporarily switches places with him or her. Any reaction abilities the Paladin has will trigger. The ability can be learned from the SaveTheQueen for 200 AP.

Cover is a job ability available to Paladins, learned for 300 AP from the Save the Queen. The Paladin chooses a unit within the range of four spaces to cover. If that unit is attacked, the Paladin temporarily appears in front of him or her to take the attack (an improvement over the previous game that means even if the Paladin and the unit being covered are both targeted by the same attack, only the Paladin will be harmed).

Cover now works on any counter attacks that the covered unit may trigger, and negates any knockback that would be done by critical hits/skills. Neither character can activate their reaction abilities when the Paladin covers an attack.

Cover is a level 10 research ability for the Warrior job, which caps at level 100 for the ability. The higher the level of Cover, the more effective the ability is. The ability Defend is the initial ability for the Warrior job, and has a chance of reducing physical damage by half. The ability's level caps at level 100, and the higher the level, the more effective it is.

Guard acts like Cover, it will guard a particular character for a turn and if that character is attacked. The character will take the attack or special attack and receive the damage.

Cover is an ability learned by the Paladin and allows them to receive damage in place of a chosen ally.

Cover is the level 5 ability of the Paladin class, requiring 130 AP to learn. It requires 1 slot to equip for characters not a Paladin to use it.

Create a barrier around you that nullifies attacks to allies inside it. Hold down the button to spend AP to maintain the barrier.

Cover is unique to the Paladin job, with a cooldown time of 15.0 seconds. Activating the ability and holding the button creates a barrier around the paladin, and the paladin and any allies inside the barrier will not take damage from enemy attacks. The paladin cannot move while the barrier is active, but can be pushed or pulled by effects such as gravity spells. This effectively defends against many enemy attacks, with few exceptions, similar to the sword skill Deflect. However, Cover drains AP very quickly if the barrier is sustained, and has a much longer cooldown than Deflect. Since the area of effect is quite small, allies must stand very close to the paladin to receive protection.

Cover is granted via some characters' Legend Materia. When a party member is targeted by most physical attacks, there is a chance that the hero with the Cover ability will block the attack, taking reduced damage from the attack.

Cover is a passive that has a 5% chance to take damage for an ally. It is learned by Rain, Cecil, Charlotte and Ollie, or obtained as Clyne's Trust Reward. It can also be equipped via Golem's skill grid after upgrading him to 2★ rarity.

Cover is a passive ability that if HP is high enough, allows one to sometimes take damage in place of an imperiled ally. It can be used by Goblin Guard, Maduin, Minimantoise, and Sphinx.

Two Knight cards, one depicting Ingus and the other depicting Arc, have the effect that when they are in a party, any damage that would be dealt to other Forwards in that party is instead dealt to them.

A character can cover for an ally from a physical attack, said character will take the damage in place of the ally they are protecting. The ability is gained through the Defend command, and then selecting the ally that wants to be protected.

Cover is Dark Knight Cecil and Paladin Cecil's ability. For 3 turns, other Allied Units in Target Lane take 0 damage when attacked and this unit takes 100% damage. Removes any other active Cover skill from Allied Units.

Full Cover is a Chivalry ability learned by Knights at job level 10. During the entire turn this is used, when the specified ally takes a single-target physical attack, the Full Cover user will take the hit instead, but only suffers half the damage.

In Bravely Second: End Layer, Protect Ally is the job level 4 support ability for the Knight. If an ally with less than 20% HP is targeted with a single-target physical attack, the user will take the attack in their place. Any job can equip it for the cost of 1 slot.

Full Cover is the job level 7 command ability for the Knight. It triggers at the beginning of a turn. During the entire turn this is used, when the specified ally takes a single-target physical attack, the user will take the hit instead, but only suffer half the damage. 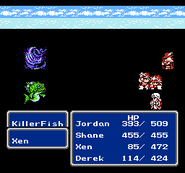 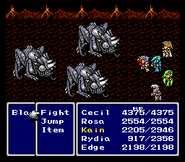 Cover Counter in Final Fantasy IV: The After Years (PSP).

Cover Counter in Final Fantasy IV: The After Years (iOS).