Sometimes counterattacks when hit by a physical attack.

Counter (カウンター, Kauntā?), also known as Counterattack (はんげき, Hangeki?), Riposte and Debug Counter, is a recurring support ability in the Final Fantasy series, typically belonging to the Monk job or monk-type characters. A character with Counter will automatically attack the opponent who initiated the attack. In some incarnations, this negates the damage from the attacking opponent, while in other versions, the attacked player will take damage and then immediately perform a counter-attack.

In games with an ATB gauge, a counter-attack does not affect the speed of the gauge nor does it change how close it is to being full. Magic Counter is a similar ability that allows one to counter magical attacks.

Counter is an Augment Ability given by Sheila after the battle in Fabul in the 3D version. It can be given to one character. When physically attacked, a character with the Counter ability will hit back with another attack. Counter always works, making it highly effective, especially when combined with Cecil's Cover or the Draw Attacks Augment.

The Counter reacts with whatever ability is in the top slot of the command list with no charge time. This allows Rydia to counter with an instant Meteor or Bahamut, for instance, though it still consumes MP.

Counter is a Level 4 ability for the Monk job, learned for 60 ABP. It allows a player to counter-attack physical attacks at a 50% chance, but the player will take damage from those attacks. It ignores most of the added abilities of weapons, such as those of the Thief Knife, Chicken Knife, and Hayate Bow, and the Twin Lance will only attack once instead of twice as usual. Only the added abilities of harps trigger with counters.

The Counter Attack Materia allows a player to counterattack physical attacks while taking damage from those attacks. It is obtained after defeating Materia Keeper, and additional ones can be won as prizes from chocobo racing (although the name of the Materia is deceptively written as just "Counter").

The Counter Materia can be linked to a Command Materia, and counters once with all the abilities of the linked Materia. While this seems straightforward it is especially important with the Throw and Steal Materia: The ability used in the Throw or Steal Materia is the one highlighted on the Materia menu, and the player is unable to counter with the other darkened ability unless they equip another source for that particular ability.

The player can stack multiple Counter Attack and Counter Materia, up to eight counters per being hit. The Counters activate in the order they were equipped.

Counter is a support ability taught by Carbuncle for 200 AP that allows a player to counter-attack against physical attacks while taking damage from those attacks. It doesn't matter if the character receives any damage or if the enemy's attack misses. Counter works in conjunction with Defend and Cover, so it is good to use this particular setup on the character in the middle of the party formation. Monk's Code item teaches the Counter ability to any GF.

Return Damage is a support ability that damages the enemy for 1/4 of the damage the enemy inflicted on the player character. No Guardian Force learns it natively; it is learned from Hundred Needles item that is refined from 100 Cactus Thorns.

Counter is a support ability that allows a user to counter-attack physical attacks while taking damage from those attacks if they hit. Its occurrence rate is enhanced with the support ability Eye 4 Eye. Counter takes eight Magic Stones to equip and can be learned by everyone save Dagger, Eiko and Vivi.

Whether or not Counter is initiated is decided by this check, which is performed whether or not the attack hits.

Counter-attacks use the same process of checks and damage calculation that are used by the Attack command.

The Counter ability is also a command ability available to a number of enemies. Each may do it in different instances. Grimlock counter-attacks when in its Physical Attack Red status. The Nova Dragon and Scarlet Hair bosses counter all physical attacks, as does the Troll enemy. The Sand Golem counters every attack towards it while its Core is out of play.

Berserkers learn Counterattack for 180 AP. It allows the user to strike back after being physically attacked.

Monks can counter an enemy's attack and take no damage from the attacks they counter. Counter is a passive ability gained once player has 10 levels in Monk, or for anyone whose Support Job is monk and has a job level of 20 or greater. Counter activates occasionally, but the chance of countering can be increased if a player uses the ability Counterstance.

With much lower activation rate, a Samurai using Seigan may counter-attack when Third Eye is active. Blue Mages can set Counter as a trait. At Lv. 79, Monks gain "Perfect Counter", which is similar to the Seigan/Third Eye combination in that the next attack directed towards them has a high chance of being countered. The effect sometimes doesn't activate, but can activate multiple times from one use.

Some (mostly high-level) equipment provide counter effect (even without MNK as subjob), notably the Cobra Harness Attire from Windurst's Cobra Unit in Campaign.

Characters can use Counter by equipping the Battle Harness. Genji Armor boosts the chance to counter, but does not grant counter on its own. Battle Harness can be purchased for 1000 gil at Dalmasca Estersand, or made at the bazaar for one Throat Wolf Blood whereupon it costs only 800. The Genji Armor can be stolen from Gilgamesh. In Zodiac versions, the Genji Helm also provides the ability to Counter.

The chance to counter an attack is determined by the character's speed.[1]

Counter only triggers when the character:

Counter can be a detriment when trying to build a chain, as even if the character never targets the "unwanted" enemy, if the enemy targets them and the character kills it by counter, the chain will break.

Counter is one of Sentinel's auto-ability that gives the user a chance to counterattack after evading an enemy attack with Evade. It never activates if the character evades an attack using Elude. Not all attacks can be countered even if they can be evaded. It can be learned by Lightning (stage 7), Snow (stage 5), Hope (stage 7), Fang (stage 7).

The Pugilist ability Haymaker is called Counter in Japanese and functions stylistically similar to Counter, as it can only be used immediately after evading an enemy attack. Haymaker is 170 potency and can inflict slow on its target. This ability was removed in Stormblood.

Counterattack with a physical strike.

The Monk job class has the Counter support ability, but it also has First Strike, which lets them counter an enemy before they even attack, dealing damage and interrupting the enemy's attack.

Nature's Wrath (also called Counter Flood) is a reaction ability the Geomancer class learns for 300 JP. It functions like Counter, but the character will not counter with an equipped weapon, but uses a Geomancy attack according to the enemy's terrain.

Follows up enemy attack with a counterattack.

Counter is available to bangaa White Monks, and hume and moogle Thieves. Counter is activated whenever a character is attacked, and most likely will follow up with a counter-attack (If the unit is attacked from farther away than they can attack, it does not activate).

Counter allows the units to counter-attack with a short ranged unarmed attack.

Additionally, the Clan Privilege Always Counter gives all units without a reaction ability the Counter ability.

There are three countering abilities, all of which must be selected and being attack to activate its effect.

Counter is the Ninja's third job ability that lets the Ninja counter any attack they evade. The effect lasts four turns.

Debug Counter is a dummied out ability that allows the user to always counterattack when hit.

Counterattack is a special ability learned at Level 85 that raises the critical hit rate of the character by 50% if they land an attack when the opponent is attacking. Its base CP cost is 50 and it requires 360 AP to master. Several of the Level 100 exclusive weapons carry the Counterattack ability innately.

Counterattack is learned at Level 82 but otherwise is identical to how it functioned in Dissidia. Exclusive weapons again carry the ability, but many returning weapons have had their effects changed.

Counter is a reactive ability that comes in three levels of power and activates in Battle Music Sequence when the player receives a "Miss" on three triggers to deal physical damage dependent on the level of the ability, up to five times a stage. Firion, Locke, Sephiroth, Squall, Seifer, Prishe, Lightning and Snow all learn all three levels of Counter.

Enter a stance that lets you nullify a blow and counter. Can inflict stop, and ensure your next hit is critical.

Counter is a Knuckle skill. A successful counter may inflict Stop and makes the user's next hit an automatic critical hit.

Counter abilities usually have a glowing fist icon to denote them.

Counter is learned by several characters, granted by the Black Belt accessory, Gladiator's Shield, and as Sabin's trust mastery reward. It has a 30% chance of triggering vs. physical attacks.

Counter is a passive, physical ability that allows non-ranged attacks to sometimes be countered. It can only counter physical attacks. It can be used by Babyhemoth, Gleefrit, Ifrit, Ifrit★, Kobold Mimic, Mimic, Mimic Jackpot, Mimic Queen, and Moomba.

It is also an enemy ability used by Behemonster, Entom Soldier, Ifrit, Mimic, and The Immortal Dark Dragon. 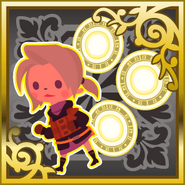 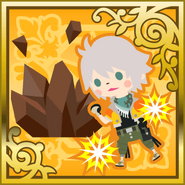 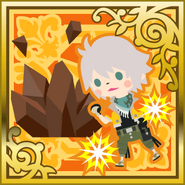