It is all an endless dream. Yet still... the fantasy must come to an end...

Cosmos is the goddess of harmony who opposes Chaos in the original Dissidia Final Fantasy and its prequel Dissidia 012 Final Fantasy. She is one of few completely original characters to appear in the Dissidia series, the others being Feral Chaos, Materia and Spiritus.

Cosmos has long blonde hair and light blue eyes. She wears a form-fitting full-length, halter-neck white dress with an ornate golden crest and blue stones around the waist. She wears bracelets, armlets, earrings and a tiara, but no shoes. She carries a light yellow shawl and a veil that extends from her tiara with the same design as her shawl.

With flowing blonde hair and white robes, Cosmos resembles the Lufenians as depicted in the PlayStation Portable and mobile versions of the original Final Fantasy.

Cosmos was loyal to the Great Will, serving her role faithfully without concern for her own safety or the fates of her warriors. According to her museum profile, while she was created in the image of Cid's wife—a strong and willful woman—Cosmos was frail compared to her, and thus unable to subdue Chaos as her creators intended. Over time, the cycles of war and the perseverance and hope her summoned warriors hold began to influence her behavior, and Cosmos began to question the plan she was playing a part in.

By the twelfth cycle, Cosmos has come to care for her warriors and acts to ensure their safety, choosing to enact a plan that will free them, even knowing it will likely cost her life. She is particularly protective of the Warrior of Light, expelling her power at the end of the twelfth cycle to save him from a manikin army, and appearing to him in the thirteenth cycle when she becomes worried about the gathering of enemies that lay ahead of him. Trusting in her warriors to be able to fight without her, Cosmos faces her death calmly when confronted by Chaos. At the start of the thirteenth cycle, when informed about her actions in the past cycle by Golbez and how he admires the resolve she has to sacrifice her life to save her warriors, Cosmos mourns it took her so many cycles to find the will to act against the Great Will.

Cosmos is a manikin, but unlike the others, is the only known successful specimen to have the full memories of a single person: Cid's wife. The Onracians used her as an alternative means to soothe Chaos. She ended up in World B, a near-mirror image of the world called World A from where she hails. Cosmos and Chaos ruled World B as its gods before Garland appeared and heralded the conflict for Cid to oversee the powers of harmony and discord at their fullest. Cosmos summoned her warriors first, faithfully following orders of the Great Will, to make Chaos fight her. Each time a faction wins, the fallen warriors who have not yet exhausted their strength are revived to begin a new war.

During one of the earliest cycles, Prishe introduced Cosmos to the Warrior of Light, another perfect manikin modeled after Cid, an individual that neither god summoned. While Cosmos was reluctant, she imbued him with her light to serve as one of her champions. It is hinted she is aware of the Warrior of Light's true nature, as well as Prishe's name for him.

Cosmos appears in a couple of official quests. She accepts Shantotto's resignation as her warrior when the wizard decides to leave World B and escape to the Rift.

Cosmos and Garland talk in her Sanctuary, where she accepts to be killed by him when he wants to see the truth about the cycles and purification. She believes the Goddess of Harmony is also the Goddess of Death, as her demise would remove her warriors. This becomes apparent when Prishe disappears, never to return for the next cycle, and her fate unknown.

After eleven cycles of conflict, Cosmos devises a way to end it by giving her warriors her own energy, which would manifest into Crystals after enough victories. Cosmos weakens herself as her plan is derailed by the appearance of the manikins and Jecht's conversion into a warrior of Chaos.

Cosmos is shocked to learn the Warrior of Light and Kain were forced to take out the rest of their allies to save them from the manikins before those remaining were led by Lightning to close the portal the manikins were emerging from. Though Cosmos loses Lightning, Kain, Tifa, Laguna, Yuna and Vaan, she gains new warriors in Terra, Cloud and Tidus before sacrificing herself to save the Warrior of Light from the horde of manikins.

Revived, Cosmos finds herself severely weakened as Golbez reminds her of the Crystals she entrusted to her warriors. Her resolve still strong as before, Cosmos transmits the message to her warriors to obtain the Crystals if they are to stand a chance against Chaos. To ensure they succeed this time, Cosmos presents herself to each of her warriors whenever they are in need of guidance. She advises Onion Knight to follow his heart to save Terra from the Cloud of Darkness, and Cecil to fight with his own power and by his allies' side rather than solely rely on them. She encourages Zidane to believe in his friends as they believe in him, and gives Firion the will to follow his dream.

After Golbez reminds that her gambit could result in the heroes' true demise, a concerned Cosmos appears before the Warrior of Light to have him stop. Surprised by the Warrior of Light's bravery and vow to save the world, Cosmos promises to believe in her warriors until the end.

After the ten warriors retrieve their Crystals and return to her, Cosmos explains the war has been decided and they will know true darkness. Cosmos teleports the warriors to the Chaos's domain within the Land of Discord, allowing herself to be incinerated by him. Her champions fade as a result of her demise, but the power of the Crystals returns them to World B where they can exist a while longer to strike back at Chaos.

During their final encounters with the villains, Exdeath reveals the Crystals contain Cosmos's power. She had intentionally weakened herself and the villains had exploited this by guiding the heroes to the Crystals for their agenda. The heroes realize that Cosmos allowed herself to be destroyed out of faith in them so they can defeat Chaos once the cycle of war was broken.

After Chaos is defeated and her champions return to their realities, Cosmos reconstitutes herself through the Crystals of the "warriors who were defeated despite their strongest resolve," according to the end of the "Confessions of the Creator" storyline. She talks to Cid about the continuing conflict despite her battle with Chaos being over, and turns down Cid's offer to leave the slowly failing world. She wishes to remain even if she would also fade from existence. After Cosmos eventually ceased to be, her will endured her permanent demise and incarnated into Materia as the conflict of the gods renewed.

In this storyline, an alternate sequence of events takes place. The cycles continue, Chaos never knowing defeat, until in the final cycles he transforms into Feral Chaos. Cosmos, too weak to summon warriors to protect herself, is sealed in the Chasm in the Rotting Land by Cid to protect her from Feral Chaos. It is unknown what happened to this alternate universe incarnation of Cosmos afterwards, as she is never seen, only mentioned.

Early trailers for Dissidia showed various villains telling Firion and Squall that Cosmos' "true nature" is that of a Goddess of Death, and question if a goddess who rules the world can be trusted. The scene in which this conversation occurs is not present in the final game, indicating that the storyline was likely changed during development and Cosmos was possibly intended as a less-than-benevolent figure. The concept is revisited in Dissidia 012 in an Official Quest, where Cosmos tells Garland that, as she has summoned numerous beings to World B to fight in her name and she maintains the "order" of a world eternally at war, she feels her true nature is a Goddess of Death.

Cosmos is voiced by Sumi Shimamoto in the Japanese version.

She is voiced by Veronica Taylor (credited as Kathleen McInerney) in English.

Cosmos's theme is "Cosmos", performed by the the band Your Favorite Enemies.

In Dissidia 012 Final Fantasy, a new theme titled "Lux Concordiae" is attributed to her, and plays when she blesses her champions with the power to obtain their Crystal.

Cosmos stands against the god of discord Chaos. A beautiful goddess of harmony, she gathers the warriors that she has summoned from distant worlds to wage war against Chaos in obeisance to the Great Will.

Cosmos's role is the Goddess of Harmony in opposition to Chaos. The space between the two is called "Rhythm", and houses a Crystal that gives birth to music. When the forces of Chaos disrupt the balance, the Crystal's power wavers. Cosmos thus sends her warriors to increase a music wave called Rhythmia to restore balance and make the Crystal shine again.

She is depicted on the logo along with Chaos in a manner similar to the logo of Dissidia Final Fantasy.

Cosmos can be unlocked as a playable character by collecting Rainbow Crystal Shards.

Cosmos: the beautiful goddess overseeing order and harmony. With Chaos, she forms one of the two pillars supporting the world. While wishing for an end to the cycle of war, she nonetheless calls on her champions...

Cosmos is a playable character, and can be unlocked from the start by transferring save data from the second demo. However, if the player did not select her among their party of four, or download the demo, she can later be unlocked by collecting Red Crystal Shards.

Cosmos is mentioned in the introduction of the Final Fantasy Portal App's Triple Triad. 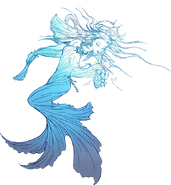 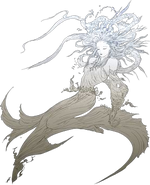 Artwork of Cosmos with the heroes of Dissidia, by Yoshitaka Amano.

Cosmos in a flashback of a previous cycle.

Cosmos giving the Warriors their crystals in the 12th cycle. 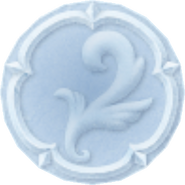 [view · edit · purge]The word Cosmos derives from the Greek term κόσμος (kosmos), literally meaning "order" or "ornament" and metaphorically "world", and is antithetical to the concept of chaos.