Cosmogony (創星記, Sōseiki?, lit. Origin of the Stars) is a book or a series of books in Final Fantasy XV that tell the legends of Astrals and the world of Eos. It has been republished in various forms, such as an annotated version and a picture book for children.[1]

A young Noctis Lucis Caelum is seen reading a Cosmogony book in a flashback, and eight books are found scattered around the world for the player to find and read. Cosmogony appears to not be a book directly dictated by the divine, but having been written by mortals based on what has been passed down of Eos's history and folklore. Its writer(s) is never stated. Final Fantasy XV: Episode Ardyn – Prologue, Final Fantasy XV: Episode Ardyn and Final Fantasy XV -The Dawn of the Future- contradict what is written in Cosmogony as the origin story of the Lucian dynasty. Ardyn blames the Lucian royalty for erasing his legacy from history books, but further details are unknown.

In the Windows and Royal Editions, the Cosmogony entries the player has found are chronicled in the Datalog.

Location: Galdin Quay, before the stairs that lead down to dock

Titan, the Archaean, steadfast as stone.
Ramuh, the Fulgurian, sharp as lightning.
Shiva, the Glacian, gentle as snow.
Leviathan, the Hydraean, relentless as tides.
Bahamut, the Draconian, unbending as iron.
Ifrit, the Infernian, fickle as fire.
Since time immemorial, they have watched over Eos.

Location: Wiz Chocobo Post on a bench near the shop

In the distant past, Bahamut, the Draconian, descended to the mortal realm and graced the people of Tenebrae. From among them, he handpicked a pious maiden and bestowed upon her the power of the Stars and his trident. Using these gifts for the good of all, she became the first Oracle—she who joins heaven and earth.

Bahamut is said to have handpicked the first Oracle from the land of Tenebrae, gifting her the powers their bloodline still wields in the present day to speak with gods, heal people's suffering and hold the Starscourge at bay with her prayers. The Trident of the Oracle is said to originate from Bahamut as well. The Oracles thus became the link between the gods and humans.

There once lived a man, born to a mortal but blessed with powers divine. Conjuring a collection of glaives he dispelled the darkness plaguing our star. As a reward for his efforts, the god granted him a holy Stone—the Crystal, which he was to guard at all costs, for it would one day choose a King to see us through the coming disaster and lead us to salvation.

This passage speaks of the man who became the origin of the Lucian kings' bloodline. One of his powers was Armiger, the ability to conjure weapons made of light that let him fight the darkness. He was given the Crystal to protect with knowledge that one day his descendant would become the Chosen King who will save the world.

The cover of Cosmogony shows Bahamut giving the Crystal to a king, and a page within shows the same king with Messengers from gods. According to Final Fantasy XV Ardyn Lucis Caelum was originally chosen to save Eos, but was cast aside when his soul became corrupted, and his brother, Somnus Lucis Caelum, ascended the throne of Lucis instead. No such "fallen king" is mentioned within the Cosmogony, however, and it is implied any trace of Ardyn was intentionally scrubbed from history, possibly by the Lucian royal line. Episode Ardyn Prologue, Episode Ardyn and The Dawn of the Future depict a version of the events where the gods were to choose between Ardyn and Somnus, and delivered their decision to the Oracle of their time.

Before falling into eternal slumber, the Six bequeathed unto man one last treasure; a ring. Yet who among us was fit to possess this gift of the gods? After some time, the ring was transferred to the hands of a man blessed with powers divine, ultimately developing the mark identifying one fit to rule.

The Ring of the Lucii was gifted to mankind by the Astrals before they disappeared from the mortal realm and became characters of legend. The ring became an heirloom to the Lucian royal family, and is to be wielded by the king of Lucis. The passage speaks nothing of the Ring's power to harbor the kings' souls until the last of them becomes the True King. Though Cosmogony posits that the Ring chose the rightful sovereign after being passed from person to person, Episode Ardyn Prologue shows that the gods were to choose the king among men directly, and of the populace many wanted Ardyn as their true king, while others desired Somnus. The Ring doesn't appear in the anime.

The Divine Host of Messengers[]

Location: Taelpar Rest Area, on a table by the motel

It is said that, in the beginning, the Six fought side by side with mankind. Even so, the deities themselves seldom appeared before mortals, and instead sent loyal servants to convey their divine will to the Oracle. These servants are known as Messengers, and they number twenty-four.

The Oracle is a woman able to commune with the Astrals. This ability is passed along her bloodline. Rather than appearing in the mortal realm with physical bodies, the Astrals would instead communicate with mankind via the Oracle by sending out Messengers. According to this Cosmogony entry there are twenty-four Messengers, but in Final Fantasy XV only five known Messengers are seen: Gentiana, Umbra, Pryna, Carbuncle and the Messenger of the Winds. When the young Oracle Lunafreya Nox Fleuret and Prince Noctis read Cosmogony, Lunafreya shows Noctis a page where the four appear with angel wings before a king and an Oracle.

In Episode Ardyn Prologue, the Oracle communes with the gods via the Crystal rather than via Messengers, who do not make an appearance.

The earliest accounts of covenants are found in ancient times dating back to the time of the Cosmogony, some two millennia ago. According to such tomes, the rites are a means by which the Oracle summoned forth the gods, that she might make the will of mortals known to the divine.

The Astrals forge covenants with the king of Lucis, and thus lend him their aid at their own judgment. The Astrals who have forged a covenant with a human will manifest with their corporeal forms to aid said person in often devastating means. The Oracle summons forth the Astrals due to her power to commune with them.

Location: Meldacio Hunter HQ west of Culless Munitions on a table near the "hanna" billboard.

Trials by which the Six grant their blessing at first mentioned in the ancient tomes dating back to the Cosmogony, some two millennia ago. Revelations left great devastation in their wake, with entire cities being laid to ruin, and people saw them as tests of their faith.

The Astrals' appearance in the mortal realm to hold a trial to the Chosen is said to have led to great catastrophes with entire cities being demolished in their wake. The person who forges a covenant with an Astral must often fight them, and the power of the gods is destructive. According to legends the first king of Lucis forged pacts with the Astrals. The kings wield special powers due to their bloodline, and thus can withstand the trials and forge covenants with the gods.

Location: Cape Caem in the basement of the lighthouse

O'er rotted Soil, under blighted sky, A dread Plague the Wicked hath wrought. In the Light of the Gods, Sword-Sworn at his Side 'Gainst the Dark the King's Battle is fought. From the Heavens high, to the Blessed below, Shines the Beam of a Peace long besought. "Long live thy Line, and this Stone divine, For the Night when All comes to Naught."

This passage tells of the Starscourge, a plague of darkness that threatens to plunge Eos into an eternal night. The "Wicked" may refer to Ardyn Izunia. The Lucian kings have the "light of the gods", as they are the Astrals' "weapon" for eventually banishing the darkness from the world, and bring "peace long besought". The "line" refers to the kings' bloodline, the "Stone divine" refers to the Crystal, and the "night when all comes to naught" refers to the fated time when the world will be shrouded in an endless night. 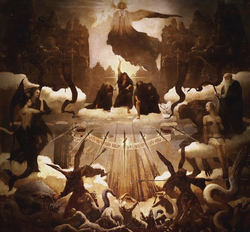 The Final Fantasy XV Scenario Ultimania explains the passage thusly: "The evil that Gods and men have struggled to eliminate, will once again threaten the world. The gods left the Ring of Light to the King of Men with an order. Defend the ring and the Crystal until the Crystal chooses a King to save the world from the coming disaster."[2] 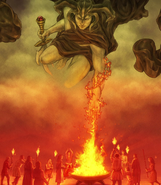 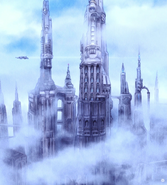 Cosmogony is the branch of science that deals with the origin of the universe, especially the solar system.