Cosmo Canyon is a location in Final Fantasy VII. It is also known as the "Valley of the Fallen Star". It is a pilgrimage site for those who pursue the study of natural life, and home to an observatory from which the planet and its surroundings can be studied. The eco-terrorist group Avalanche was founded in Cosmo Canyon by an unspecified person at an unknown time. The members of Red XIII's tribe guard this land. Every fifty years a male and female of the species perform a rite to appease the planet.

Cosmo Canyon has several notable features: there is an observatory created by the elder Bugenhagen; the Cosmo Candle, the guardian fire that never goes out; and the Shildra Inn that serves a popular drink named after the Cosmo Candle.

Cosmo Canyon is Red XIII's birthplace. For years, Cosmo Canyon was protected by a tribe of warriors of Red XIII's species. Nanaki (Red XIII) was the descendent of a line of guardians. Cosmo Canyon was once at war with the Gi tribe who were defeated by Nanaki's father, Seto. Seto secretly sacrificed himself to save his home and family, but continued to watch over Cosmo Canyon as a statue. [1]

The organization of Avalanche was founded in Cosmo Canyon by a man who realized the danger posed by the mako reactors after learning the Study of Planet Life.[1] Despite this, Cosmo Canyon never turned into a main battlefield between Avalanche and the Shinra Electric Power Company, as the movement placed their base of operations in Wutai.

In Before Crisis -Final Fantasy VII-, the Turks were sent to Cosmo Canyon to find a specimen of Red XIII's species for Professor Hojo's research.[2] At the same time, Nanaki and the female Deneh were to perform the fifty-year ritual. Nanaki was frightened to take part and told this to his adoptive grandfather, Bugenhagen. Nanaki's fear made Deneh consider him a coward. While Fuhito of Avalanche traveled to confront his old master, Bugenhagen, the Turks fought through Avalanche forces to try to steal Deneh, but Nanaki jumped ahead to save her. Though Nanaki is taken into Shinra hands, Deneh escapes unharmed.

In "In the Land of the Study of Planet Life", while traveling across the continent on a buggy, the vehicle broke down and the party is forced to take refuge in Cosmo Canyon. Red XIII, who hails from the town, went with them, and the group heard his real name for the first time. Bugenhagen told Cloud Strife and his companions about the planet and the lifestream. Aerith Gainsborough learned more about Cetra and the promised land, while the townspeople told Cloud about Professor Gast and how he visited the town thirty years ago, having made a grave mistake. Barret Wallace was excited to arrive at Cosmo Canyon as the place that Avalanche had first started.[1]

Bugenhagen sensed Red XIII resented his father, as Red XIII believed he had ran off when fighting the Gi tribe. To let Red XIII see the truth for himself, Bugenhagen opened the sealed door to the Cave of the Gi, filled with ghosts of the Gi tribe. At the end they found a petrified Seto. Red XIII learned that his father defended the cave with his life and that his body turned to stone due to the Gi tribe's venomous arrows, but his petrified body still looked over the cave entrance. Red XIII forgave his father and howls at his memory, which sends tears falling from the stone Seto's eyes.[1]

Later, in "What Aeris Left Behind" Cloud and his allies brought the Huge Materia they've retrieved to Bugenhagen's planetarium. When Meteor began approaching the planet, Bugenhagen died at the age of 129. The other elders, Elder Hargo and Elder Bughe, continued to study the history of the planet's life.[3]

Cosmo Canyon is located on the southwest of the western continent of the planet. It is situated among a tall rock plateau reaching high above ground level, giving the telescope perched atop the highest plateau a greater vantage point. The town is traversed using steps made of stone both leading up to the town and connecting its different levels.

Cosmo Canyon's settlements, including the Tiger Lily Arms, the Starlet Pub, and the Shildra Inn, are found mostly within caves inside the plateau, as well as in wooden huts situated around it. The settlements are lit by candlelight, and a campfire is found outside, as the entire civilization has very little machinery.

Overlooking Cosmo Canyon is the observatory at the very top. This is a metal structure with a large telescope, and a planetarium inside using holograms. The observatory is the largest place in Cosmo Canyon that makes use of any machinery, and makes use of electric lights, but still inside has barrels and wooden walls characteristic of the rest of the Cosmo Canyon's settlements.

Beneath Cosmo Canyon is the Cave of the Gi, a vast network of caves which is blocked off from visitors by a metal gate known as the Gate of Naught. Past it lies the wall created by Seto to block invaders.

Cosmo Canyon is visited for the chapter "In the Land of the Study of Planet Life". Throughout much of the chapter, Red XIII is a required party member, and after a number of scenes, the party must travel to the Cave of the Gi for a dungeon below.

Cosmo Canyon is later returned to for "What Aeris Left Behind", as any Huge Materia that the party acquires is taken to Cosmo Canyon. It can also be returned to to find Red XIII's ultimate weapon, the Limited Moon, at any point after returned to Midgar for "Mako Cannon Rampage".

Cosmo Canyon is visited in chapter 18.

This section about a location in Before Crisis -Final Fantasy VII- is empty or needs to be expanded. You can help the Final Fantasy Wiki by expanding it.

Cosmo Canyon appears as the FMS for its eponymous theme.

Though the Cosmo Canyon in the final version differs greatly from the original design, remnants of that design still exist within Final Fantasy VII. The originla game manual for the Japanese version included the screenshot, and the art can be see on TV screens in the Wonder Square entrance, and the dummied Honey Bee Inn area.

The script for Cosmo Canyon changed compared to the final game. Originally, Bugenhagen's death in which he gives Red XIII his ultimate weapon would have been drastically different, with Cloud and the party not leaving Red XIII alone with Bugenhagen, and Bugenhagen presenting the weapon almost as an afterthought. This version is still dummied within the game's files. Additionally, a form of Jenova was originally going to be fought in Cosmo Canyon.[4]

, implying she drew it as a child having never visited the canyon before. Tifa also serves a drink named after Cosmo Canyon in Seventh Heaven.

A sequence from the Planetarium.

The Observatory in an FMV. 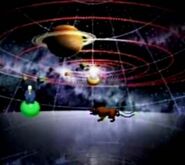 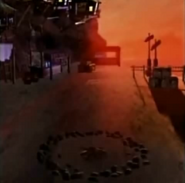 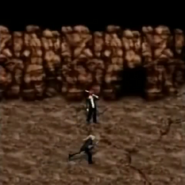 The word "Cosmo" likely derives from "cosmos". [view · edit · purge]The word Cosmos derives from the Greek term κόσμος (kosmos), literally meaning "order" or "ornament" and metaphorically "world", and is antithetical to the concept of chaos.

The use of the term in Final Fantasy VII likely alludes to its "world" meaning, as Cosmo Canyon is the center of study on the planet and its lifestream.