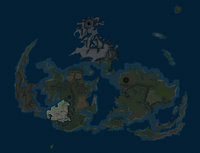 The Cosmo Area is a region of the world map in Final Fantasy VII located on the western continent on a mountainous region, and contains mostly dirt. When the player enters it the lighting switches to dusk colors. Mountains border it and the Gongaga Area surrounds its south and east, with some of the border being an open border marked by where the grass stops. A river in the northwest marks the border to it and the Nibel Area and Gold Saucer Area, with the Nibel Area having a shallow area traversable by buggy.

In the center of the area's canyons is Cosmo Canyon. Within the canyons is the Cave of the Gi, a secret cavernous passage leading into Cosmo Canyon whose entrance on one side is sealed by the Gate of Naught, and on the other (not visible not on the map) is defended by the petrified Seto.

The Cosmo Area is passed through during the story while chasing hints to Sephiroth. Cosmo Canyon is not an intended destination for the party, however, the buggy will break down outside of the town if the player tries to pass it, and the player must complete the events at the town to get it moving again. Thus, the player needs to "park" the buggy further away from the town so it won't break down to be able to do all available Condor War battles at Fort Condor, or thy won't be able to return there in time to participate.