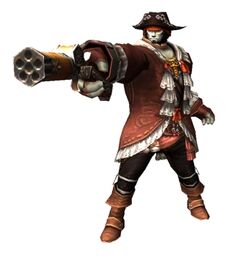 Descendants of the dauntless pirates that once scourged the seas of the Near East, corsairs rely on the "Hexagun," a multi-barreled revolver, and elaborate luck-based abilities to alter the stakes of battle.

The Corsair (コルセア, Korusea?) is a special job class in Final Fantasy XI, based on the gambler. They are incapable of wearing heavy armor and use mostly their knives, swords, and special Hexaguns to dish out damage. They use the rolling of dice and the drawing of cards to increase attributes of their fellow party-members.

Corsairs have a number of abilities with names inspired by gambling, such as Wild Card or Double-Up. Their primary ability, Phantom Roll, allows the Corsair to roll a dice for a chance to apply an attribute increase on themselves and fellow party members, the effect of which is based on the type of dice rolled itself as well as the resulting number rolled. For instance, a Hunter's Roll will give nearby party members within range increased accuracy. The rolling of dice, however, is not a guaranteed success story and is not without risk; each ability has lucky and unlucky numbers, which can provide either better or worse bonuses depending on the number. Additionally, Corsairs can even "Bust" on a roll, afflicting them with a penalty to the attribute they originally intended to increase instead.

Corsairs were once a sort of naval fleet under the command of the Kingdom of Ephramad, which was invaded and taken over by the Empire of Aht Urhgan. The fallen Corsairs pose as undead enemy-type characters and take on a Fomor form and are particularly violent and aggressive. The other Corsairs, a small group known as the Seagull Phratrie, still survives. The Phratrie's hideout is located in Arrapago Reef; their ship was damaged while escaping an Imperial naval fleet, so they cannot sail as they once did. In current times, the Imperials are determined to wipe out the Corsairs once and for all, but they always seem to escape capture one way or another. Even though the Empire has tried bribing and even a double-agent, the Seagull Phratrie always seems to elude their grasp. 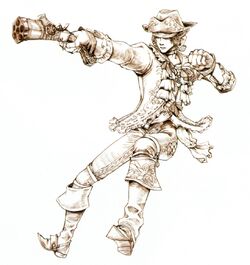 The Corsair job quest, "Luck of the Draw" can be started in Aht Urgan Whitegate. To complete the quest, the player must first view two cutscenes in White Gate at (J-12) NPC Ratihb and (L-9) Mafwahb in that order. Then head to Nashmau by way of Port Ephram. Once in Nashmau, take the north exit out and proceed to I-6. This area is infested with Lamia, Undead, Chigoe, and Morbol type enemies who will all aggro via Sight/Sound. Sneak Oil/Sneak and Prism Powder/Invisible are required for getting through this zone unharmed. The player should pass through this area around 20:00-4:00 Vana'diel time, so the Imps will not be among the Monster Host in the Mire.

At I-6, the player will zone into Arrapago Reef. Inside, there is an Iron Gate only unlockable using Thief's Tools or a Lamian Fang Key. To obtain the key, kill Lamias in either the Caedarva Mire or the Reef, or look for a ??? behind a large enemy called the Jnun. After passing the Iron Gate, there will be a set of passages and eventually the player will reach a ship. On it will be another ???, examining it has the player view a cutscene.

The player must then return to Nashmau and take the west path out of the city. Heading from that point to the coordinate E-9 on the map, remembering to pass through E-10 (Graveyard) heading north to Talacca Cove.

Once inside Talacca Cove, the player must proceed along the coastline until locating another ???. The player will receive a Forgotten Hexagun and a cutscene pointing to a cave close by. At the conclusion of the cutscene, proceed to the back of the cave to a large Rock Slab to view another cutscene. At its conclusion, the player will become a Corsair and receive the Corsair's Die.

Corsairs are a "support" job not used primarily for dealing damage, taking damage, or healing. While this is true, Corsairs do have a good damage potential using ranged attacks. The true power of a Corsair has to do with their ability to bolster their party members around them. Though their status effects are variable, on average, they provide the best bonuses available in the game.

Ninja is a common support job for Corsairs. Corsairs have no real access to shields, so they would ordinarily have an empty hand. Dual Wield helps them use a weapon in both hands for more stat bonuses, and Utsusemi is useful for avoiding damage if the Corsair is pulling creatures back to the group.

Corsairs are treated as a support class, and many parties will expect a Corsair to sub White Mage. This is not a bad thing; while Corsairs are not great at soloing low level, the White Mage support job can be useful after the Corsair obtains their first Hexagun, and allows them to Solo while healing. This is especially useful if attacking enemies like Worms and other magic using enemies.

With the update that gave Quick Draw the same amount of TP one normally would receive with a ranged attack, Samurai became a very useful support job for dealing damage, especially in later levels. Having access to Store TP and Meditate allow the Corsair to gain TP extremely fast. Also, a Corsair could make use of Hasso or Seigan if they are using a Fire Staff or Vulcan Staff, which can either aid in their damage output or survivability when being attacked. With the Samurai support job it is possible to self Skillchain using the high damage Marksmanship Weaponskills. The TP gaining abilities of the Samurai support job also combines well with Corsair abilities like Quick Draw and Triple Shot, allowing them to gain TP very quick. Additionally, the Corsair's Tactician's Roll and Samurai Roll can further aid in the TP gain. One of the best damage dealing paths for Corsair, but very expensive because one would be gaining TP at the expenditure of bullets and cards.

[view · edit · purge]A corsair is a privateer or pirate.