Corruptor (風魔, Fūma?, lit. Fuma) is a recurring weapon in the series.

Corruptor is a weapon for Auron, obtainable when the dominant abilities on any katana are any three status "Strike" abilities. 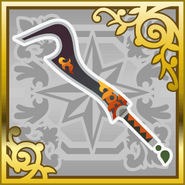 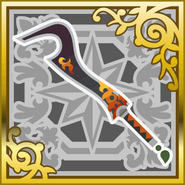 [view · edit · purge]The surname of Fūma is associated with the Fūma Clan of ninja. Fūma translates as "wind demon". Though having served since the Nanbokucho period, their exploits were most famous during the times of Sengoku under the employ of Toyotomi Hideyoshi. The clan was renowned for its focus on controlled chaos and acts of sabotage, from psychologically goading opposing forces into attacking each other, to hiring pirates, thieves, brigands, and thugs for diversions involving raids on villages on enemy territory. While they formally went by the surname of Kazama, it is popularly believed they went with Fūma to befit their reputations as "demons of the wind", not unlike Fujin and Raijin, the demon gods of storms who were said to have reigned terror on men before their subduing into penance. Fūma Kotarō is the most famous of their clan, and is a title for every successor for the head of their ranks.