The Corneo Colosseum is located in the wild and dangerous Wall Market. The winner of a colosseum tournament receives not only glory and fame, but a substantial prize.

Corneo Colosseum is a battle arena in Final Fantasy VII Remake. It is part of the main quest in Chapter 9, "The Town That Never Sleeps" and afterward the player can partake in matches there for various rewards, including manuscripts and the party's Level 2 limit breaks. The arena is located in the Wall Market along the way to Don Corneo's mansion, the proprietor of the colosseum who runs the entertainment district.

The Corneo Colosseum is a callback to the Gold Saucer's Battle Square from the original Final Fantasy VII.

For tonight, the most gruesome spectacle anywhere in Wall Market or beyond shall be yours to witness! Here in the Corneo Colosseum!

The first set of challenges, the Corneo Cup, is mandatory and part of the story progression, taking place during the quest "Underground Colosseum" in Chapter 9, "The Town That Never Sleeps". Later, separate challenges appear in the sidequests "Shears' Counterattack" or "A Dynamite Body", and during "In Search of Hope", the quest "Tomboy Bandit" leads to another separate challenge.

Aside from these, the following challenges are available:

Each challenge lasts five rounds, and between each round, 50% of HP and MP is restored. Items cannot be used. Enemies cannot be stolen from.

Which challenges are available depend on the chapter. During "The Town That Never Sleeps", only challenges involving Cloud and Aerith can be participated in, available after defeating the Hell House. During Chapter 14, "In Search of Hope", parties can involve Barret and Tifa. Three-person teams are only available during this chapter.

The vs. Wild Animals challenges are solo battles, which award the manuscripts that provide the character's second limit break level. Each battle is against biological enemies, meaning that equipping

Elemental Materia can be an effective strategy, as can pairing it with

Magnify Materia to wipe out waves completely, if available. Immunity to

Sleep helps in this gauntlet.

The first round is against two wererats, making it a straightforward round where only normal attacks are required. The second round has two gorgers and a blugu. The blugu is capable of inflicting Sleep, meaning it should be defeated first after avoiding its bubbles, while the gorgers are less powerful, but can still stun a character. The enemies can be defeated using character abilities.

Two guard dogs are fought on the following round. Though they are more durable, the strategy is mostly the same. Players may wish to stay defensive and use either ice magic or abilities to defeat them. The following round features a hedgehog pie and a grashtrike. The former can be killed faster, allowing the latter to be focused down next.

The final round is against a lesser drake, a flying enemy (meaning Cloud and Tifa must use aerial attacks, while Barret and Aerith rely on their range). The easiest way to defeat this enemy is using magic after normal attacks build up its stagger gauge.

As a two-person team battle, the party can either include Cloud and Aerith during "The Town That Never Sleeps", or can be a combination of Cloud and Barret, Cloud and Tifa, or Tifa and Barret if attempted during "In Search of Hope". As many enemies are capable of stunning melee characters, it is preferable to pair a ranged with a melee character. Because the enemies are human,

Fire Materia is most effective, and as before, elemental and magnify materia are good pairs for it.

The first round has two Corneo lackeys and one bandit. They are simple to defeat with normal attacks and character abilities. From this point onwards, rounds become more difficult, and the next round features a single fast-attacking Corneo lackey who can stun a melee character. The player should engage the enemy with a melee character, and switch to the other once the lackey focuses on them, using the other character to destroy it from range.

The third round has two bandits and one Corneo lackey and all enemies are capable of stunning. The same tactics apply as before; one melee character should take the focus so the ranged character can destroy the enemies from a distance. The fourth round features The Huntsman, a durable enemy with a riot shield that will block frontal attacks. One character can rush in, after which the player can switch to the other to hit the Huntsman from a distance, and make use of magic to pressure it and leave it vulnerable. The final round is against one Huntsman and four bandits; after killing the bandits the player can focus on The Huntsman.

Similar to the vs. Wild Animals battles, the vs. Shinra Thugs round is a solo gauntlet where defensive tactics are preferred. Although many of the battles are fought against human enemies,

Lightning Materia can exploit the weaknesses of many of the enemies, including the more powerful ones.

Parry Materia are also helpful, and for melee characters,

The first round is against a security officer, two grenadiers, and one Sentry Gun Prototype. The security officer and grenadiers can be dispatched quickly with normal attacks and character abilities, allowing the Sentry Gun Prototype to be focused on, though it is important to evade its attacks. The second round is against two flametroopers, whose flame attack can be deadly if not avoided. Its flames can be avoided by dodge-rolling, and afterward the player can rush in to deal damage. The player can also simply use abilities that hit from range to defeat them.

The third round is against two Sentry Guns and a shock trooper. The guns should be dispatched first to allow the shock trooper to be focused on next. This can be done by using abilities it cannot evade (such as most spells, Cloud's Blade Burst, or Tifa's Divekick), or by simply attacking until it stops evading, and then focusing it down. The fourth round, against a riot trooper and two Slug-Rays, is a similar ordeal, though it is critical to destroy the Slug-Rays as quickly as possible as their attacks can stun the player. The riot trooper is best defeated using attacks it cannot block (which are similar to those that shock troopers cannot block).

The fifth round is against a Sweeper and a Sentry Launcher. The Sentry Launcher should be destroyed first, as its missile attacks can be dangerous due to their range, allowing the Sweeper to be focused on next with character abilities and lightning magic.

This challenge can only be fought with Cloud, Barret, and Tifa during "In Search of Hope". It is important that at least two characters have materia with offensive spells, of which lightning materia is best to exploit the weakness of more powerful opponents.

Time Materia is also useful on all rounds, but especially on the final round.

The first round is fought against an elite security officer, an elite shock trooper, and a ghost. The elite security officer can be dispatched the quickest, while the other two are more challenging. As the ghost becomes immune to physical damage, casting spells can destroy it. Meanwhile, the elite shock trooper is capable of dodging many attacks before becoming vulnerable briefly. Powerful attacks that it cannot dodge (such as Tifa's Divekick or Barret's Maximum Fury) are effective against it, though it is best to have one character draw fire from it and attack it with the other.

The second round is fought against two cripshays and one helitrooper. The former are easily dispatched with character abilities from Cloud and Tifa, while the latter is best fought with Barret. The third round has a sahagin and two elite grenadiers. The elite grenadiers can be defeated first, allowing all three to focus on the sahagin. Defending against its attacks is critical.

The fourth round is fought against four enemies: a Laser Cannon, a Sentry Gun, a scissorclaw, and an elite riot trooper. The cannons should be dealt with first to remove the ranged threat, and the scissorclaw can be defeated next. Against the riot trooper, the easiest way to defeat it is to have Cloud or Tifa engage it, taking its focus away, and then use Barret's Maximum Fury or Focused Shot from behind its shield to defeat it.

Haste counteracts Slow, while Poison can be healed through or counteracted by casting

Regen or Chakra. These enemies are durable, but can be defeated with character abilities and spells. The venomantises should be destroyed first as they are weaker, allowing the queen grashtrike to be defeated last.

Much like the previous two-person team battle, a party may consist of Cloud and Aerith during "The Town That Never Sleeps", or be a combination of Cloud and Barret, Cloud and Tifa, or Tifa and Barret if attempted during "In Search of Hope". Enemies have a wide variety of elemental weaknesses, but lightning materia is best against some of the stronger enemies fought. Immunity to

Silence can also be helpful.

The first round is fought against a hedgehog pie and a hedgehog pie king. The hedgehog pie can be killed first to allow the king to be focused on, against which the usual character abilities apply. The second round is fought against the Wrath Hound, which uses Throat Clamp to bind a character. When this happens the player should switch to the other party member and remain defensive while using attacks to try to stagger it. Sustained damage should eventually destroy it.

The third round is a more challenging round against a doomrat and a Chromogger. The doomrat should be killed first, but the Chromogger is more difficult due to its silencing attack and its powerful Skull Cracker attack that can deal crippling damage. The player needs to avoid this attack by remaining evasive, and otherwise stay evasive and burst it down using lightning magic or character abilities.

The fourth round is against a bomb and a cerulean drake. Spells are helpful against both ,and against the cerulean drake, aerial attacks help stagger it. Similar strategies apply as before.

After completing a challenge in the Colosseum, repeating it will offer a "Grab Bag" as a reward. This gives a random set of rewards dependent on the challenge.

The player can use the souvenir shop after completing the storyline parts at the Corneo Colosseum at "Underground Colosseum". 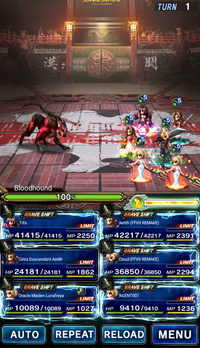 The theme for the location is called "Corneo Colosseum" on the soundtrack.

Hell House, which was a normal enemy in the original Final Fantasy VII, was made into a boss battle in the colosseum to give it spectacle, as the developers felt its bizarre nature would make it strange if it appeared in the world with no run-up.[1] 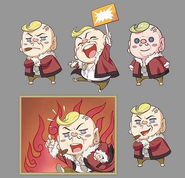