Final Fantasy Wiki
Register
Don't have an account?
Sign In
Advertisement
in: Locations in World of Final Fantasy

Cornelia, The Nether Nebula, The Watchplains

The Cornelia Region is located in Grymoire in World of Final Fantasy. It is traversed by descending the steps of Cornelia and entering the pathway under the bridge. It is first visited in Chapter 3, "Old Acquaintances" and consists of divergent pathways. Lann and Reynn make note of how the region emits a clean air. The Cornelia Region is one of the four locations in Grymoire that cannot be fast-traveled to by a Gate or the airship, the others being the Bridge Overlook, Babil Region, and Desert Region.

At the beginning of Chapter 3, the twins traverse the region to access The Nether Nebula.

Cornelia is located to the south of the region and hosts a kingdom placed on a majestic bridge. Ascending the steps will lead directly into the town.

Located to the north and to the far right of the region. Its entrance is a rocky bridge leading to a cave that is said to be host to powerful mirages.

Located to the north and to the far left of the region. Its entrance is denoted by outposts for the Goblin Camp.

The following tip pops up on the screen when exploring this area for the first time. 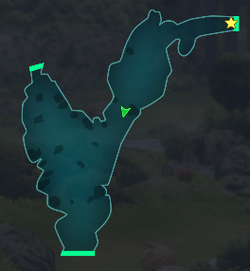 "World of Beauty" is the background theme that plays in the Cornelia Region. It also plays in Bridge Overlook.

After defeating the final boss, "World of Hope" replaces "World of Beauty" as the background theme.