Cornelia Karst is a non-playable Hume character in Final Fantasy XI. She is the daughter of Hrichter Karst, president of the Republic of Bastok. Her paternal grandfather, Derek Karst, was an influential Bastokan senator during the Crystal War. She enjoys spending time in the city's mining district and associating with its Galka population.

She is named after Cornelia the Mythril Musketeer, a monk who was lost ten years before the Crystal War. 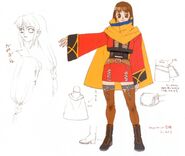 [view · edit · purge]Cornelia is a feminine form of the name Cornelius, which is possibly derived from the Latin word cornu which means "horn".