This is Cornelia, the city of dreams.

Cornelia, also known as Coneria , is a town from the original Final Fantasy. It is located just southeast of the Chaos Shrine, and serves as the game's starting point. Princess Sarah of Cornelia has been kidnapped by Garland, but the Warriors of Light rescue her and the King of Cornelia has a broken drawbridge rebuilt to allow the Light Warriors to travel to Pravoka. The town is built just below Castle Cornelia.

The background music that plays in Cornelia is the Final Fantasy "Town" theme.

One of the original servers was named Cornelia. It was merged into the Durandal server along with the Rabanastre server.

During the ending, after Chaos is defeated, the Warriors of Cosmos are teleported to a grassy field near Cornelia. They each vanish back to their own worlds shortly after, save for the Warrior of Light, who begins walking to Cornelia Castle.

One of the rooms from the Online Lobby is also named Cornelia.

Cornelia appears as ruins in World B, at the Cornelia Plains. In the Confessions of the Creator Scenario, a Teleport Stone can be found near it. Moglin operates his shop here in all storylines where Cornelia is visited. On certain days he will sell one each of rare items such as booster accessories, Elixir-type trade accessories and the Banish/Death and KP Bonus Skills, items sold at no other moogle shop.

The port directly south of Cornelia in Final Fantasy corresponds to the Forsaken Kingdom gateway, which acts as an access point to Order's Sanctuary just off the coast. In Confessions of the Creator, the player's party spawns here at the start of the story, an allusion to the start of Final Fantasy.

Cornelia is also present as a room for customized characters of the game's Multiplayer Mode Online Lobby.

The stage is fairly large, and the terrain, such as the trees, is key for a tactical victory. Midway through battle, the sky becomes darker, and large rocks circle around the stage in the sky.

The play I Want to Be Your Canary in Final Fantasy IX has a character called "Cornelia", though they are more likely named after a Shakespearean character than the town from Final Fantasy; however, the allusion may be two-fold as Final Fantast IX includes numerous callbacks to the early series games. 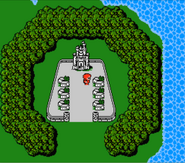 Cornelia in the World Map (NES). 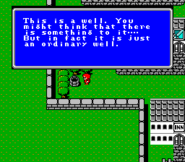 Cornelia in the World Map (PS).

Cornelia, as seen in the World Map.

Cornelia in the World Map (GBA). 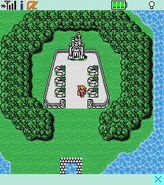 Cornelia in the World Map (Mobile).

The ruins of Cornelia in World B in Dissidia 012 Final Fantasy.

[view · edit · purge]Cornelia is a feminine form of the name Cornelius, which is possibly derived from the Latin word cornu which means "horn".

The original NES localization of Final Fantasy translated this town's name as "Coneria". This is likely a result of the process of converting the word "Cornelia" (a given western female name) to Japanese, the result is "ko-neria", which loses some of the word's nuance. This was re-translated into English as "Coneria" in the NES (which is itself a more direct analog of the Japanese translation of Cornelia) without regard for the name's origin. Later translations took this into account, and properly localized the name as "Cornelia". The town's Japanese name is shared with a location in another series where it is translated as "Corneria" instead.