The Coral Sword (さんごの剣, Sango no Tsurugi?), also known as Coral Blade and Coral, is a recurring weapon in the Final Fantasy series. It is often either lightning or water-elemental in nature. It can also be described as having mediocre strength in all of its appearances.

A sword effective against aquatic foes.

The Coral Sword has an Attack power of 19 and deals extra damage against Aquatic enemies. It is found in the Cavern of Earth B2 area. The weapon is bugged in the NES version, where it does not inflict more damage to aquatic enemies as intended.

The Coral Sword only appears in the Easy Type version. It retains the Ancient Sword's effectiveness against ghouls, has an attack of 45, and is Thunder-elemental. This weapon is metallic. It is found in the chest that the Ancient Sword is usually in.

The Coral Blade is a mid-ranked, Lightning-elemental sword that provides 38 Attack, 35% Accuracy, and is Lightning-elemental. It can be dropped from Sahagin Knight, bought in Kaipo or Mist (as Kain) for 2,500 gil, or found in the Ancient Waterway (as Ceodore). It can be equipped by Cecil, Ceodore, Kain, and Golbez.

The Coral Sword is a Lightning-elemental sword with an Attack power of 34. It can be bought in Jachol for 2,800 gil. It can be stolen from the Cray Claw.

The Coral Sword can be equipped by Steiner. It is provides 38 Attack, is Lightning-elemental, and teaches the Sword Art Charge!. It can be bought for 4,000 gil at Treno or Lindblum before entering the Shimmering Island portal, and it can be stolen from Lani.

The Coral Sword appears as a generic high-level short sword, with its only notable traits granting minor Water resistances and extra Water damage to some attacks.

The Coral Blade is a high-ranked weapon for Vaan obtainable through crafting with the Tempered in Ice recipe. It provides +90 Attack, +45 Magick, and +60 Speed, and is Water-elemental. It uses a generic sword sprite during battle.

The handle of this single-edged sword has been decorated with intricate coral piecework.

The Coral Sword is a Lightning-elemental sword. It is Delita's default weapon in his first fight in Chapter 2. It can be bought in the outfitters from Chapter 2 onwards, for 3,300 gil.

Coral has a sword icon before its name. It can be bought in Undersea Town for 9,880 GP. It has 50 uses and an attack power of 8, the damage formula for Coral is based on Strength. This weapon is effective against water-type enemies.

Coral has a sword icon before its name. It can be bought for 26000 GP in Edo and Final Town. It has 40 uses, it also increases a Robot's HP by 99 and increases their Str by 22. The damage formula for Coral is the user's Str x13 and its effective against Insects such as Spiders, Beetles, and Moths.

Coral Sword provides 46 Attack and 20 Hit Rate. It is Lightning-elemental and is bought for 7000 gil in Mathel, Oasis, Gardenia, and Fabrica and is found in the Underwater Temple.

The Coral Sword is a level 50 sword that adds 38 to Attack and increases base Bravery by 20% at the start of the battle. It can be obtained by trading 15,460 gil, a Rapier, a Spirit Stone, and a Transmogridust.

The Coral Sword is a Lightning-elemental sword.

Handle with care! Much coral has painstakingly been worked into this fine blade.

A sword imbued with lightning that is very effective against aquatic foes. It is actually made from a piece of sea coral, an organism known to readily absorb magic, naturally charged with electricity. Apparently sea coral achieves this charged state by absorbing the electricity of any lightning that strikes the water it lives in. Electrified coral is still used in many regions to hunt for fish, especially in regions where thunderstorms often occur.

Coral Sword is a Sword obtained by crafting it using 600 gil, x5 Lightning Crysts, and x9 Mythril Ores, and as the reward for completing the quest Niche Dish Wish. It provides 33 ATK and is Lightning-elemental. 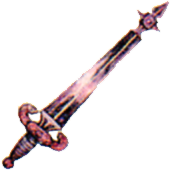 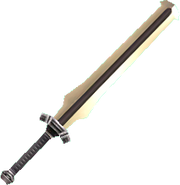 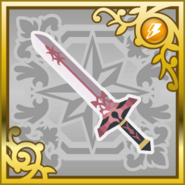 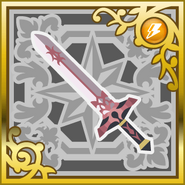 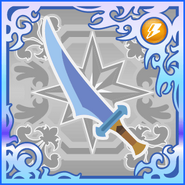 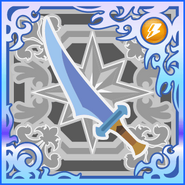